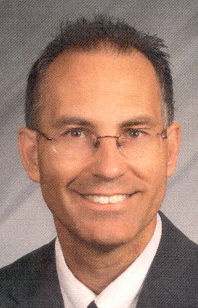 A loving husband and special Dad, Mark Watson was truly devoted to his family.  Whether it was showing his sons, Matt and Josh, the skills of carpentry, playing basketball, hunting and fishing, taking family vacation trips or simply enjoying garage sales and the Farmer’s Market with Debbie, Mark enjoyed every minute of life.

Mark had an insatiable appetite for learning.  He was a graduate of the University of Kansas and a devout Jayhawk fan.  Always with a fascination of weather, Mark began his career with a degree in Meteorology.  Later he decided his passion was in teaching and continued his education at the University of Kansas. That is where he met his future wife, Debbie Franz.  They were married on July 25, 1987 in Lawrence, Kansas.

Mark had been President and Headmaster at Maur Hill Prep School in Atchinson, KS.  There he received his Masters in Education at Benedictine College.

The funeral mass will be celebrated at 11:00 a.m., Monday, July 27, 2009 at St. Michael’s Catholic Church, Wausau.  Father William Grevatch will officiate.  Burial will be in Lawrence, KS.  Visitation will be Sunday from 4:00 p.m. until 8:00 p.m. and Monday from 10:00 a.m. until the time of services all at the church. Helke Funeral Home is assisting the family with arrangements.  You may sign our family guest book at helke.com.


A memorial fund has been established for Matt and Josh.  Contributions should be made payable to the  “Watson Family Education Fund”, c/o Newman Catholic Schools, 619 Stark St., Wausau, 54403 or may be sent to any People’s State Bank location in Wausau

Never miss an update about Mark. Sign up today.