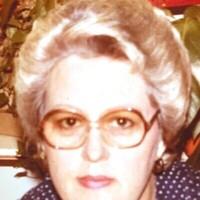 Visitation for Martha “George” Ford of Tyler, TX are scheduled at Jackson's Burks Walker Tippit Funeral Home on Tuesday, October 27, 2020 from 1:00 to 3:00 PM. Funeral services will be at 3:00 PM at the Funeral Home with  Pastor Samuel Priddy officiating.

Mrs. Ford was born on September 17, 1932 in Heavener, Oklahoma, the daughter of Earl and Nellie Smith. She was raised in Arkansas with her 4 siblings. She passed away October 23, 2020 in Tyler at the age of 88. Martha married Henry Ford in 1967. She had 4 children. She was a devoted Christian, wife, mother, grandmother and friend. She never met a person she didn’t like.

She was preceded in death by her parents and siblings L.E. Smith and Nelta “Blondie” Anderson.

In lieu of flowers, donations are appreciated to Hospice of East Texas. They took great care of Martha and the family is very thankful.

Proud to say Martha was my friend. Met her as a customer 50 yrs ago when I first moved to Tyler. We remained friends, tho I haven’t seen her much, after moving from Lindale to the Hill Country. She was one of the Sweetest most loving people I’ve known. I will always remember her laugh. My condolences to Henry and her family, I know she will be greatly missed.

My thoughts and prayers are with Henry and all of Martha's family. She was one of Dennis' favorite people and I know she will be missed

Martha was such a loving friend. I am so grateful we had such a wonderful friendship. She will be sorely missed! My condolences to you all.

Love this family very very much! May GOD Bless and Comfort them !She was a very very beautiful lady!!

Our condolences to you all. Mrs. Martha was a very sweet lady. Prayers

We have wonderful memories of Martha. The only extended family we knew besides Martha and Henry are Gary and Irma Kelly and their sons Nicholas and Brian. We have you in our thoughts in prayers.

Aunt Martha was one of my favorite aunts! She always loved on us like we were hers! When I was little, I thought she was Vera's sister instead of Earl's! It hurts my heart that they are all gone, but I know there's a mighty reunion going on in heaven! We love you guys!

Never miss an update about Martha "George". Sign up today.