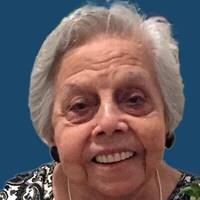 On October 5, 2021, Mary B. Escoto, passed away peacefully and beautifully as if cradled in our Lord’s welcoming arms. She was at home in her amethyst bedroom surrounded by her loving children, two devoted sisters, a niece, as well as “Midnight” her sweet household cat.  Mary was 94 years old.

During the 20th Century’s Depression Mary was born in Brackettville, Texas on February 25, 1927 to Luis and Mabel Barrera. The third oldest of twelve children, being raised in a humble upbringing, Mary learned early in life the meaning of responsibility, hard work, family values and faith. Her siblings always looked up to her for guidance, protection, and love. As Mary matured so did the likeness to her mother in appearance and mannerisms. This inspired her siblings’ unconditional affection with respect; acknowledging Mary as a family Matriarch in later years.

While growing up Mary found simple pleasures in reading, listening to the radio, and learning about current events, especially the weather. She was “a quick study” excelling in school at all levels and often eager to share knowledge by tutoring her siblings. Mary was her high school Valedictorian, Class of 1947 and sang for her graduating class. This milestone paved the way for her lifetime commitment to the importance of education. She believed education levels the playing field for all walks of life, rich or poor. She believed an earned education teaches commitment and determination. Lastly, she shared George Washington Carver’s belief “Education is the key to unlock the Golden Door to Freedom”. Later in life as a parent Mary would sacrifice most material pleasures to ensure her children received a complete education.

After graduation, Mary and family moved to San Antonio, Texas where she quickly found employment as an Account Specialist at Solo Serve Department Store downtown and worked there 10 years. Of note, Mary was the quintessential image of a modern-day woman with class. Always wearing her signature “high heels” she effortlessly complimented the latest fashion with her dark hair, fair complexion, radiant smile, and petite hourglass figure.

It was the summer of 1953, as Mary got off the bus and confidently walked home, she caught the eye of Army Master Sergeant, Richard Escoto. He was across the street at the neighborhood icehouse “socializing and having a cold one” with friends. As weeks passed, Richard watched Mary get off the bus and walk home. His attraction and interest in Mary grew stronger, all the while his affections remained unbeknownst to Mary.

One day Mary’s father received a letter addressed from Master Sergeant Richard Escoto, Fort Polk, Louisiana. In his effort to exceed the bounds of ideal courtship, Richard’s mother hand delivered it in person. In it he introduced himself and respectfully asked Mary’s father permission to court her. He also included a letter to Mary, introducing himself and in a mild romantic tone, expressed his affection for her. Poetically, Mary’s letter ended with “Goodnight My Dear, sleep with the angels.”  This was the beginning of Mary & Richard’s loving traditional courtship ending with a beautiful wedding at San Fernando Cathedral, New Year’s Day 1955.

They were married 42 years and had four children, Mary Inez, Sylvia, Richard Genghis and Aleta. As a wife, Mary was a loving, committed, fun, lifetime partner. As a mother she was selfless, loving, devoted, firm and supportive. As a daughter-in-law she was caring, respectful, dependable, and loyal.

Throughout the years Richard answered many calls of duty, while Mary decided to stay in San Antonio and “Keep the home fires burning.”  She knew it was best to provide the children a loving, stable, secure life offered by one home, one city, one school district, etc. Mary raised her four children embracing the role of a strong, independent parent.

Mary was proud of her children, and very quick to defend them from anyone sharing a different opinion. After Aleta, the youngest child reached middle school, Mary went back to work in retail at Frost Brother’s, a high-end elegant store downtown. She worked hard to support her family until retiring in 1989.

After 14 years, Richard permanently came back home in 1979. Mary remained the loving but strong wife. Soon after Richard retired, he was diagnosed with terminal cancer in late 1996. Mary devotedly cared for him until his death in April 1997. In a loving tribute to the only man she ever loved, Mary placed in Richard’s casket the first letter he wrote to her; such a beautiful gesture of eternal unity.

In 2002, Mary’s unwavering faith was tested by the untimely death of her oldest daughter, Inez, (whose nickname was Nesi).  After experiencing a parent’s worst nightmare, she would frequently say, “Nesi is my first thought in the morning and my last thought at night.’  Mary’s faith in eternal life was confirmed shortly after Nesi’s death. While sitting in her chair at the kitchen table Mary clearly heard Nesi’s voice call “Ma” followed by brisk breeze through the house. In the living room, she vividly saw Nesi dressed in white with her beautiful smile. From then on, Mary found comfort in seeing Nesi’s image and faithfully believed it was a divine experience.

Mary spent the last two decades as an astute senior citizen always aware of what was going on in the family, in the news and the weather. She enjoyed traveling cross country with Sylvia, Alan, Victoria and visiting Aleta at various military installations. As a devoted Spurs fan, she and Alan went to the games. Tim Duncan and Manu were her favorites; though she was quick to give Tony Parker “a piece of her mind for hogging the ball and missing baskets.”  Mary’s favorite spot was at home sitting at the kitchen table eating meals and snacks while watching her TV shows. She never missed Eyewitness News, Gunsmoke, Wagon Train, The Price is Right, a Spurs or Cowboy’s game.  As a military wife, Mary loved her country. She often reminisced where she was and what she was doing during many of our nation’s historical victories and tragedies. Just to mention a few events; end of the Great Depression; the Pearl Harbor attack, the end of WW II and the Vietnam War; President Kennedy’s assassination, the landing on the moon, September 11, 2001 attack, Obama winning the Presidential election; COVID-19 pandemic, and the pulling of the troops from Afghanistan.

Mary was never lonely. Her children, grandchildren and great grandchildren were always there for loving companionship. She never wanted for a thing and her children would see that she had it all and more! Mary was proud of the fact that she and Richard were able to provide their children with a good education’’. She was proud of her family and enjoyed them till the end. Mary loved her life and was determined to stay with them as long as she could.  It is important to mention the joy Mary had with her grandchildren: Omid, Anastasia, and Victoria. She thanked God for being here to see them grow up to become responsible, productive adults.

In Omid, she proudly saw her handsome grandson become a man successfully making it on his own in Austin’s competitive restaurant and bar industry. She loved his holiday prime rib, frequent spontaneous phone calls, visits, and his similarities to his mother, Nesi.

In Anastasia (Stasia), just as the song says, Mary “saw her go from crayons to perfume.”  She loved Stasia and saw her being as beautiful inside as she was out. Stasia and Grandma would sit close to each other “like besties” to chat and joke about anything and everything. Mary was very proud of Stasia’s determination to provide and raise her two loving great grandchildren, Fazion and Alina.  Mary understood the challenges Stasia went through and respected her role as a loving mother. In Mary’s final days, she shared a private “woman to woman” conversation with Stasia. Her spoken words were from a lifetime of wisdom and tears for their final goodbye.

Mary’s life was filled with countless precious moments with her youngest granddaughter Victoria, who is very much like her mother (Sylvia) and her ‘Mamo”.  She is loving, intelligent, and beautiful. From the day she was born Sylvia and Alan made sure Victoria’s life actively included her “Mamo.”  For twenty-six years Mamo gratefully and joyously shared so many of Victoria’s activities, achievements, and milestones: From first words, first steps, childhood tea parties, imaginary taco stands, trick or treating, dance recitals, volleyball games, band concerts, high school graduation, Texas Tech University graduation and accomplishing her career goal as an excellent schoolteacher. Whether Mamo was there in person or in spirit, she was always so proud of “Her Girl.” In Mamo’s last days, Victoria joined her for Sunday breakfast. She gently helped her Mamo eat a bowl of oatmeal; undoubtedly giving her hope to live another day.

There are two sentimental quotes that appropriately capture Mary’s devotion as a mother and grandmother: “A Mother’s heart is a special place where children have a home" and "Between the earth and the sky above, nothing can match a grandmother’s love”

There is one last memory of Mary: she loved flowers on all occasions. The gift of flowers made her “school girl happy” and beautifully smile from ear to ear.  Flowers will be greatly appreciated as a celebration of her life.

My Sincerest Condolences to the Escoto Family. Mary was a beautiful friend and we will love and treasure our lifetime friendship with her. Her memory will live in our hearts forever. May her soul rest in the Eternal Kingdom of Heaven forever and ever. With sadness and deepest sympathy, Tommie and Maria de Lourdes Bueno Lopez.

My deepest condolences to my great friend Richard and his family. Rest in peace Mrs. Escoto.

My condolences on Mrs. Escoto's passing. I will keep you and your family in my prayers. God bless you and comfort you daily.

I remember several occasions to visit Rick at Mrs. Escoto's house, oh those High School years (CCHS). And a few brief conversations with Mrs. Escoto: Immediately apparent was her sincerity, being humble, a parent, a beautiful Lady of great virtue. Heaven has received an Angel and her name is Mary B. Escoto.

Oh my, what a legend of a human being this lady has left her family. I have only known Aleta, her youngest daughter for about 4-5 years, but I already see Mary Escoto in Her. Aleta's loyalty and concern for her mother, the entire family and even her neighbors, amaze me. Mary lived a full and beautiful life and she surely has been received by our Creator with open arms. I know we've all heard the profound statement, God saying: "Well done my Faithful Servant." Mary is now in...

Keeping the family of this Wonderful Woman close to our hearts.