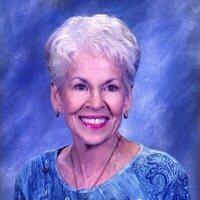 On July 6, 2020, Mary Lynn Walden Cleaver passed away peacefully at the age of 89. Mary Lynn was born November 8, 1930 to Fannie D and Cecil Walden in Memphis, TN. She and her six siblings were raised in The Children’s Home in Morrilton, AR , after the death of their mother and is the last surviving sibling.

In July 1945, Mary Lynn met the love of her life, Odis Cleaver. He became a Methodist minister in the Texas Annual Conference, and she was a loving, supportive minister’s wife.  Mary Lynn was musically gifted and her solos blessed all who were privileged to hear them.  One of her favorites was His Eye is on the Sparrow.  Known for her delicious pies, homemade biscuits and streaked gravy, Mary was also an accomplished seamstress, fervent walker, artist and poet. She brought smiles, hugs & love to everyone around her. However, most important to her was her relationship with Jesus!

Mary Lynn was preceded in death by her husband of 57 years and  survived by her four children and their spouses:

In lieu of flowers , donations may be made to :

I remember "Miss Mary" as a beautiful, sweet lady with a wonderful smile and gorgeous voice. Please know that the Cleaver family will be in my prayers and that I have fond memories of being their neighbor when they were in Frankston. Jennie Northcutt Minter

Fly High my sweet friend and I will always treasure the memories of you. I love you. MJ

Never miss an update about Mary Lynn. Sign up today.