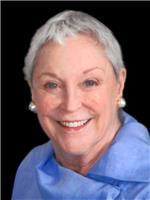 Mary "Mooney" Zatarain O'Neill passed away on Friday, July 12, 2019 in Covington, LA. She was born on August 31, 1935 in New Orleans, LA to the late Charles Clement Zatarain, Sr. and Anna Claire Lamantia Zatarain. Mooney was married to her adoring husband, Harvey Edward O'Neill, for 31 years. She was the loving mother of Jeff O'Neill, Robin Mulkey (Bob), Chris O'Neill (Cindy), Susan Anderson (David), Judi Kuebel (Donald), Kip James (Jessica), Jennifer Lambert (Jerry), and the late Charles James. Mooney was the very proud grandmother (Meez) of Bobby Mulkey (Kelsey), Lexi Mulkey, Sean O'Neill, Darcy O'Neill, Kelsey Anderson, Kirsten Anderson (Jerry), Kiley Webb (Chris), Elizabeth Kuebel, Emily Kuebel, Chelsea Harford (Scott), Deven James, Bailey James, Jimmy Lambert, and Jack Lambert. She was the great-grandmother of 7 beautiful great-grandchildren. Mooney was the sister of the late Charles Zatarain, Jr. Mooney never met a stranger and had a zest for life that was contagious. The 31 years she and Harvey were married were filled with love and affection. They were devoted to each other and their family. Together they were active parishioners at Mary, Queen of Peace Catholic Church. Relatives and friends are invited to the Funeral Mass at Mary, Queen of Peace, 1501 W. Causeway Approach, Mandeville, LA 70471 on Wednesday, July 17, 2019 at 1:00 PM with visitation from 11:00 AM until Mass time. Interment will follow the service at St. Lazarus of Bethany Cemetery, Covington, LA. In lieu of flowers, donations may be made to Mary, Queen of Peace Catholic Church. Please Share a Memory on the Tribute Wall at www.ejfieldingfh.com.

Mooney was my favorite Southern Lady. She always brightened any conversation with her bubbly attitude and happy disposition. My prayers to Harv and all their kids. Norm

Mary Anna grew up on Pontchartrain Boulevard and I lived in the next block. My family always enjoyed the Zatarian Christmas party where Mr Zatarian served drinks from a converted Upright piano bar. Watching Mary Anna play stock down with the other neighborhood kids was a favorite pastime for me. Fortunately, I spoke with her a few years ago and we reminisced about our childhood.

May she Rest In Peace.