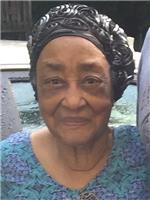 Maudris Cador Laws was called to eternal rest on May 18, 2020. Born in Ventress, Louisiana, on December 22, 1934, she was the eldest of three children to Joseph Walter Cador and Anna Battley Cador. She was blissfully wed to Samuel L. Laws for 44 years until his passing in 2006, and from this union came the joy of her life, her son, Eldrick Samuel Laws. A devout Christian, Maudris was a dedicated member of Immaculate Conception Catholic Church. She was a devoted teacher, spending over 30 years of service in the Pointe Coupee Parish public school system. Maudris was an avid traveler, fanatic football fan, and a great cook. She had an impact on every life she touched. She leaves behind her beloved son, Eldrick (Regina) of Atlanta, Georgia; granddaughters, Kendall Laws, Sydney Laws, Shelby Laws, Taylor Laws, Atlanta, Georgia; her embraced son, Derwin Franklin; brother, Norman Cador, Baton Rouge; sister, Adanna Cador, Slidell; one remaining Aunt, Rosa Lee (Battley) Johnson, Baton Rouge; Uncle, Henry Spooner, Baton Rouge; special niece and nephew, Gwen Walker, Baton Rouge; Larry Laws, Woodbridge, Virginia; treasured friends, Marlene Wilson, Norma Lewis, Audrey Hampton, a loving godchild, Betsy (Harleaux) Bernierd and a host of nieces, nephews, other relatives and friends. Visitation takes place on Thursday, May 28, 2020 at Carney and Mackey Funeral Home from 4- 7 pm. Interment (family only) will follow at Port Hudson National Cemetery in Zachary, LA.

Ms. Laws taught me in fourth grade and was such a dynamic teacher in my growing process. She was such a powerful influence into the continual shaping of my life; even that young! I wish I'd known a way to contact her before so I could tell her how wonderful of a teacher she was. I prefer giving someone their congrats and celebrate them while they're here on Earth. Sorry for the missed opportunity. K.Noil

One of the best teachers we had at Livonia. She made history challenging, but interesting. She always pushed us to be our best. I have talked about her often over the years to my kids and others. Dedicated, inspiring and unforgettable.

Mrs. Laws was a wonderful history teacher, mentor and role model for the many students she taught. She was loved by all of us. My prayers and love go out to the family. Praying for Gods peace and comfort for all of you.

In loving memory of a wonderful cousin. We will love you and miss you always. My grandmother was her Aunt. Uncle Joe was my favorite great uncle. My dad was Lovance ka

One of my favorite Teachers... Mrs. Laws saw me for who I was from our first meeting... Homeroom and 7th grade history, Jr Beta & Beta Club thru my graduation from high school, ... She loved me and believed in me... I am heartbroken for her son and family... My Prayers with them and My Gratitude for Her place in my life...
Jolisa Doucet LHS Class of 1979

Mrs. Laws was one of the very best. I can hear her laugh right now. :-) She could be tough when necessary but she was so wise and honest and I knew that she cared for us deeply. She definitely made a difference in my life and I love her and remember her always. We were blessed to have her teach us about history and about life. My deepest sympathy goes out to Eldrick and all her family. LHS Class of 1980.

Mrs. Laws was one of my best teacher at Livonia High, May she RIP LHS class of 82

To a great teacher and friend who made me discover wonderful things about myself that may not have materialized. She taught me with perseverance anything is possible. Even though I was not in the BETA Club she brought me on many trips to places I would not have gotten to see as a teenager. That's the kind of person she was!
Rest in peace, but only for a little while. I know there are many things for you to see in heaven.
C. Chenevert

Mrs. Laws was one of my favorite teachers. I absolutely loved her and think so highly of her. She definitely touched my life and I am so grateful to have had her as a teacher. She was one classy lady! My prayers go out to her family.
Sincerely,
Darla Franklin
Livonia High School Class of 87

Never miss an update about Maudris. Sign up today.