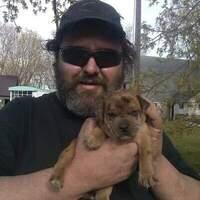 Michael Robert Burkett, 51 years old of Kinde, passed away on November 16, 2020, at Covenant Cooper Hospital in Saginaw after a brief illness.   Michael was born to Robert Burkett and Genevieve Burkett on December 6, 1968. Michael and Treasa Freeman were married on May 23, 1988. He was employed at Huron Castings for many years.

Michael is survived by his wife Treasa, of 32 years, his sons Mike Jr. , Tyler (Stephanie) , and his daughters April (Jerry) Kula and Trisha (Luke) Gutkowski , all of Kinde; his grandchildren Kelsey, Lance, Blake, Trinady, Khily, and Dainen;  his brother Timothy Burkett, and sister Annemarie  (Danny ) Sokalski of Elkton. He was preceded in death by his mother, Genevieve Burkett and his brother, Billy Burkett.

Cremation has taken place at Sunset Valley Crematory in Bay City. The family will have a memorial service at a later date.

Memorials can be offered to the family in care of Treasa.