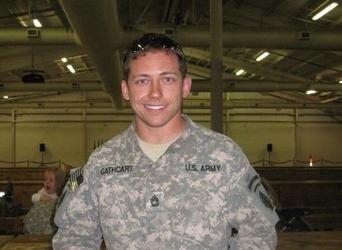 Left behind to cherish his memory are his fiancée; Heather Oliver, his sister and brother-in-law; Trishia and Michael Watson, three very special nieces; Nellie, Sonia and Wren, his mother; Jeanne Cathcart, his grandparents; Michael and Patricia Cathcart, his aunts and uncles; Linda Cathcart, Steve (Chris) Cathcart, and Ed Cathcart, and the 1st Special Forces Regiment. He was preceded in death by his great grandmother; Nellie Peplinski and his faithful companion; Adele.

The Funeral Liturgy will take place Wednesday, November 26, 2014 at 10:00 a.m. at All Saints Parish-St. Boniface Campus (501 N. Lincoln St. Bay City, Michigan 48708). The celebrant will be Rev. Fr. Stephen J. Fillion with interment following in Green Ridge Cemetery. Full Military Honors will be conducted by the U.S. Army. The family will be present at the Gephart Funeral Home, Inc. on Tuesday to receive family and friends from 5:00 to 9:00 p.m. The Vigil for the Deceased will take place Tuesday evening at 7:30 p.m. at the funeral home. Michael will be taken to the church on Wednesday to lie in state from 9:00 a.m. until the time of services. Those planning an expression of sympathy may wish to consider donations to the Special Forces Charitable Trust or the Wounded Warrior Project in Michael's memory. www.gephartfuneralhome.com

Prayer Shawls 4 Fallen Soldiers ([email protected]) is an organization (formed 2009) with groups throughout the country who work to send handmade prayer shawls and/or lap robes to families who have lost a loved one while serving our country. Members of Trindle Spring Lutheran Church of Mechanicsburg, PA would like to extend our sincere sympathy and to honor your loved one's sacrifice and memory by sending our prayers and comfort through a prayer gift. If you are interested, please contact...

Trisha, my heart breaks for you and your family! Your brother was truly a one of a kind american hero! Don't ever forget that! His warm smile, and kind heart you will have to hold on to forever! Your 3 girls should always know how amazing he was!!! Blessings to you and your family always!!! Love and hugs!

I know there are no words to say at this time, except how sorry that I am. My thoughts and prayers are with you always. Michael will never be forgotten.

My deepest sympathy to the family and friends of Sgt. 1st Class Michael A. Cathcart. I shall always be grateful to him for his service and sacrifice for our country.

Prayer Shawls 4 Fallen Soldiers ([email protected] is an organization with groups throughout the country who work to send handmade prayer shawls and/or lap robes to families who have lost a loved one while serving our country. Members of Trindle Spring Lutheran Church of Mechanicsburg, PA would like to extend our sincere sympathy and to honor your loved one's sacrifice and memory by sending our prayers and comfort through a prayer gift which will be mailed to you. If you are interested, ...

I was so very very sorry to hear this news. Jeanne I felt as though we watched him and Trisha grow up at YDF and I cannot possibly express how very sorry I am. My heart breaks for you all.
Thank you Michael for your service and may god hold you in the palm of his hand.

Dear Cathcart Family & Friends,
We just wanted you to know that we started our Thanksgiving Dinner prayer, with a special one for Michael and for your family and loved ones. We realize that it is a small tribute, but we did raise a glass and speak about Michael's sacrifice and your dear loss. May God Bless You & Keep You safe & Strong. Sincerely, The Gili Family On Behalf of US Hockey Players Support Our Troops!

Michael was a true American Hero. God bless you for all you have done. My thoughts are with you J & T.
Rest in Peace, Soldier.