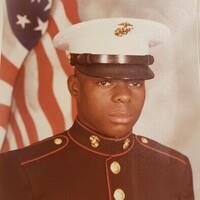 It was on the morning of February 6, 2021 that the angels of Heaven were dispatched to the home of Michael Jerome Adams. Michael was born the 7th child of the late Louis and Rebecca Adams, Sr. on May 11, 1957. He was reared in the West Norfolk section of Portsmouth, Virginia, where he matriculated through the Portsmouth Public School System.

After graduating from Churchland High School, Michael enlisted into the United States Marine Corps. He served one enlistment term and had duty details in Japan and California. He received several awards and obtained the rank of Corporal by the end of his dedicated service. Michael was among the 1% of those who faithfully serve their country and he was indeed a proud Marine.

As a young child, Michael or “Mike” (as he was often called), loved riding mini bikes and motorcycles through the neighborhood, usually with no helmet or gear. Dancing and singing were his pride, but he had no rhythm and could not hold a note. On a good day, you were sure to find him in front of the TV watching cartoons, Animal Planet or an old western or war movie. Michael always had a kind heart and gentle spirit. Everyone who encountered Michael was left with a profound appreciation for living life to the fullest.

A public viewing will be held in the Melvin J. Blowe Chapel on Tuesday, February 16, 2021 from 1-7pm. A celebration of life service will be held at 11am on Wednesday, February 17, 2021 at Balm Church East Campus, 523 East Washington St. Suffolk, VA 23434. Rev. Wilbert C. Adams will deliver the message of comfort. The internment will be held at Greenlawn Memorial Gardens, 3920 Airline Blvd, Chesapeake, VA.

To my family.... God is your strength through it all. Just look to the hills where your help cometh from the Lord. Love y'all❤❤

Pastor Adams, Sister Pam.....The Comforter is near hold on to Him. Sending our thoughts & prayers to you & the entire family. We love you dearly.

So sorry for the loss of my cousin...sending prayers and love

Grief can be so hard, but our special memories will help me cope. Today is tough but tomorrow I pray will be better. Love and miss you at the same time. Rest well my brother.

I LOVE YOU POPS & WILL MISS YOU SO MUCH MORE!

Never miss an update about Michael Jerome. Sign up today.