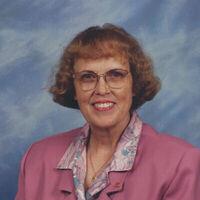 Modena (Lovelace) Cooley, 84, of Blanchard went home to her heavenly Father on Sunday, August 9, 2020, at her home.  The daughter of Ora Dell (Cain) Lovelace and Weaver Jay Lovelace, she was born February 1, 1936, in Temple, Oklahoma.

Modena was raised on a dairy farm in Tuttle and attended Tuttle Schools, graduating in 1954.  She married Henry Cooley on November 13, 1954, in Tuttle, Oklahoma.

Modena was a dedicated Mother, Mema, and God’s example of a “virtuous woman, for her price is far above rubies” Proverbs 31:10.  She worked outside the home for a number of years for Safeway/Homeland and ran a Grade A Dairy Farm with her parents.  She loved teaching GA’s and was the Director for Senior Adults at First Baptist Church in Blanchard.  She was an active choir member and G.I.F.T. class member at Union Hill Baptist Church in Purcell.  She will be remembered by her family and friends for her words, “Put Jesus First.”

She is preceded in death by her husband, Henry Cooley; sister, Betty Lena; brother, Jay Roy; sister-in-law, Edwina; and her parents, WJ and Ora Dell.

Funeral service will be held at 1:00 PM, Monday, August 17, 2020, at Union Hill Baptist Church in Purcell, with Pastor Barry McConathy, officiating.  Interment will follow in the Washington Cemetery in Washington, Oklahoma.  Memorial donations may be made to Union Hill Baptist Church.  Arrangements are under the direction of Eisenhour Funeral Home of Blanchard.  Online obituary and guestbook are available at www.eisenhourfh.com.

Modena was one of the nicest ladies we have ever known. She was always thoughtful and caring for the needs of others. We will all miss her very much. She made the world a better place because she was in it.

Will miss her wonderful smile. What an encouragement she has been for me and so many others.

Our thoughts and prayers for the Cooley family. Modena was such a great example of how Jesus teaches us to be. She will be missed dearly.

I am so sorry to learn of your mother’s passing. What a wonderful person that embodies many Christian attributes. I have very fond memories of times at the First Baptist Church!

Never miss an update about Modena. Sign up today.