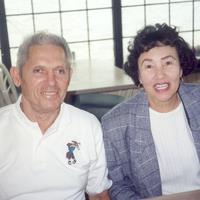 Murray M. Airhart, Sr. was born on April 20, 1934 in the town of Bermuda, in the Parish of Natchitoches, Louisiana.  He was the seventh child of eleven born to Samuel V. Airhart and Bertha Roberts Airhart. Murray attended St. James Catholic School in Alexandria, Louisiana.  During which time he served as an altar boy. In 1948 his family moved, with the help of sister, Bertha Lou, to El Monte, California. Murray graduated from Dorsey High School in Los Angeles.

In the year, 1948, when he was just about 14 years old, Murray first heard the voice of his future wife to be, Rosemary.  As his poem goes, “I think it was the year in ‘48’, when I heard her voice.  It was nice sweet and kind. But I was only another boy. Yes, another boy that heard of her. Another boy who talked to her. Another boy who wanted her. Yes, another boy who was thrown from her”.  Murray met his wife, Rosemary by a phone call to the grocery store he worked in back in Louisiana.  She had asked for another boy, so Murray started to pretend he was the other boy on the phone.  Hence their love story started.  Murray wrote many poems while they were dating about his love for her. Rosemary also moved to California with her family at a separate time.  With the thanks of his cousin, Lois, they met up again in California, started “courting” and were married in 1953. They had three children, Murray Martin., Jr., Lori Desirée and Roxanne Marie. As a family, they attended St. Mark’s parish in Venice, California.

Murray worked for McDonald Douglas Aircraft, and for the most of his working life, was a termite inspector in pest control.  Soon he was working with one of his best friends, Dick Armstrong, to start their own termite pest control business, A & W Termite Company. Later, Murray would help Dick with the many houses he owned to do repairs.  Murray was very handy and loved working with wood and tools. He made dog houses, covers for house meters, bird houses, planters and doll houses.  He did most of the additions and updates to their home as well.

Murray would travel with his friend and wife several times to La Paz, Puerto Vallarta, and Cancun to go deep sea fishing. Murray loved to travel and spoke of the clear blue seas in Hawaii and Tahiti. An Alaskan adventure was another trip they enjoyed as well as going to Jamaica and Novia Scotia.  He also enjoyed traveling with the children to visit friends and relatives.  The family would take trips to Oregon, Washington, Canada and Vancouver Island, Louisiana, Arizona and the Grand Canyon, Mexico, Michigan, and Utah. They also enjoyed camping at nearby lakes and seashores where they would fish, go clam digging and enjoy the outdoor adventures. He also enjoyed eating at his favorite restaurant in Marina Del Rey, “Killer Shrimp”.

Murray loved all dogs, as he brought home many, even against his wife’s concerns.  He gave them names like Smokey, Lady, Tiny and Leroy. His favorite furry friend, Jean-Claude will always be by his side.

Murray loved his family very much, and always had an open door to the many co-workers and rascals he encountered throughout his working years.  He loved playing dominos and music was a must.  Friends would come over and play their many instruments, to make that beautiful noise.

On December 21, 2020, Murray was called to his heavenly home, just one month after his 67th wedding anniversary. That night, the Star of Bethlehem guided him to his final eternal life, to be joined with his parents, siblings, Etheleen, Bertha Lou, Sylvester, Mary Octavia, Gene Autry, Lucy Dolores, William Marshall and two unknown deaths after birth.  Murray leaves behind a loving wife, Rosemary, son Murray, Jr., daughter, Lori and her husband, Frank, with grandson Justin, daughter Roxanne, and granddaughters Mia and Jenna, as well as his youngest brother, James (Jimmy), many in-laws, nephews, nieces, god children and loved ones that will always be cherished.

The memorial service can be viewed via zoom:

I remember the good ole days

Blessings to you and your loved ones

Never miss an update about Murray. Sign up today.