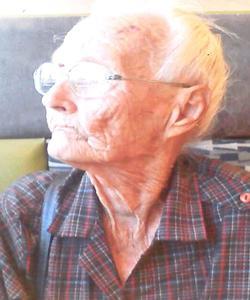 Myrtle Young, age 92 of Haworth, OK passed away on Wednesday, August 3, 2016 at Paris, TX. She was born on March 13, 1924 in Washington County, AR, the daughter of Robert Barber and Tennie Thompson Barber.


Myrtle was a homemaker. She enjoyed quilting, gardening and taking care of her yard. Myrtle was a member of the Redland Church of Christ and was a lifetime resident of McCurtain County.


She was preceded in death by her parents; her husband, Melton Young; brothers, Arthur Barber, Harold Barber, Ira Barber and Virgil Barber; and a infant sister, Pirl Barber.


Myrtle is survived by her brother and sisters-in-law, James and LaDonna Barber and Loretta Wilson all of Haworth, OK; niece, Joyce Deen and Roger of Haworth; nephews, James C Barber, Stanley Barber, William Barber and Ronnie Wilcox all of Haworth, OK and Justin Wilcox of Seattle, WA; several great-nieces and great-nephews, cousins, other relatives and many friends.

Never miss an update about Myrtle. Sign up today.