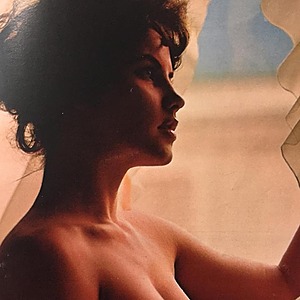 Not the right person? See All ›
Created by Staci Layne Wilson and has not been verified by Legacy.com or our partners.
BORN
August 16, 1939
DIED
December 16, 2018
AGE
79
LOCATION
Gig Harbor, Washington

Nancy Edna Bacon, who was born on August 16, 1939, loathed her middle name. She wasn’t especially fond of her first name, either. But she did love bacon. Extra crispy, if you please. When she went into pinup modeling in the 1950s, she took on the “initials: BB” mantle, going by Buni Bacon—and was dubbed “Bacon and Legs” by her many admirers. Her friends called her “Rabbit.”

Standing just five-foot-two, her shapely stems took her from the farm she grew up on in Ellensburg, WA., to Las Vegas, NV., as a runaway adventurer with a fake I.D. and a penchant for making friends in high places. In fact, when Nancy was working as a cocktail-waitress at The Sands, she became the darling of the local celebs. As she recalled in her memoir Legends and Lipstick, “After about a month of constant, adoring surveillance, I was finally invited back into the inner-sanctum where the Rat Pack drank, partied, and made love until dawn. But none of the boys dared lay a glove on me. Word had come down from The Chairman of the Board, Frank Sinatra, that I was underage and could only be ogled from afar. So, I honed my drinking skills and picked up intel no young lady should ever hear!” She soon left Sin City and after a whirlwind tour of Europe, Nancy settled in Hollywood, CA.

She appeared in several films—cheesecake clunkers with names like Sex Kittens Go to College and The Private Lives of Adam and Eve—but she never took to acting because she hated having to be on set at the crack of dawn. She preferred late nights to early mornings. Her life took a hairpin turn when she met Don Wilson, co-founder and rhythm guitarist of the hit band, The Ventures. Wearing a tight yellow sweater, lime green pedal-pushers, gold high-heels and a saucy smile, she graced the cover of their 1964 LP Walk, Don’t Run Vol 2, then tied the knot with Don shortly after. The couple welcomed a daughter, Staci Layne, but decided not to continue their duet. While she was no quitter, Nancy never remarried. Instead, she focused on her fledgling writing career and had her first novel published in the late sixties. She was also the editor of the infamous Confidential magazine and worked as a gossip columnist.

Throughout the swinging sixties, Nancy hobnobbed with heartthrobs ranging from Paul Newman to Jayne Mansfield, and could party hearty with the best of them. The seventies were a bummer for the nation and for Nancy: she battled breast cancer and alcoholism, but true to her tenacious Leonine nature and her refusal to concede defeat, she beat both and emerged into the 1980s with a book deal and a beautiful cottage in the forest of Idyllwild, CA., which she dubbed “Naughty Pines.” She wrote several romance novels and indulged her daughter’s horse-crazy phase with a never-ending string of four-hoofed friends. Nancy loved all animals, but especially cats—when she was in her twenties she had her own ocelot, plus helped train lions, cheetahs, and cougars for the movies—and throughout her life she was never without an orange tom. While she was incredibly creative in most ways (she was a whiz with sewing machines, contact paper, staple-guns and Mod-Podge) that originality did not extend to the naming of those ginger-striped kitties: Mickey was followed by Mickey, who was followed by Mickey, and so on.

Her wanderlust took her to Pennsylvania for a spell, but she eventually went back to her roots: the enchanting Pacific Northwest. She lived in Gig Harbor for the rest of her days, with... you guessed it: a very spoiled orange cat called Mickey.

While undeniably strong-willed, she was addicted to cigarettes—even the trendy treatment at Schick Shadel failed; at least there was a money-back guarantee—and took her last puff on December 16, 2018. Nancy passed away on her own terms, bringing to mind a song she loved: My Way. She adored Sinatra, but the Elvis version was closer to her heart because he was her favorite guy (and the “one that got away”—of all the stars she knew, The King not only eluded her, he had the nerve to die on her birthday in 1977! But in later years, she appreciated the coincidence because she could count on an Elvis Presley movie marathon on television every August 16th.) The year of her birth holds a special place in Old Hollywood cinema: Gone with the Wind, The Wizard of Oz, Wuthering Heights, and Stagecoach were, like her, minted in 1939.

She always had a backup bottle of her favorite perfume (Joy by Jean Patou) and was never seen in public without makeup. Though she was genuinely glamorous, Nancy was a doting mother who made sure her daughter had homecooked meals and the coolest hand-sewn Halloween costumes. She enjoyed reading, gardening, cooking, and feeding the parade of wild raccoons who made her home the first stop on their nightly rounds. She was a steadfast pal and confidante to many, and had a rare quality and loyal nature that kept friends through thick and thin and over many decades. Long before it was cool to do so, she accepted everyone with equal ease regardless of their age, gender, orientation, or race (with Richard Nixon being the exception... she detested “Tricky Dick”).

Since the lovely lady was a “super-hot” pinup model, cover girl, cinema siren, and romance writer, it is fitting that she was cremated. Regardless of where the winds carry her, Nancy Bacon leaves an indelible mark. She had her hard times, but when all was said and done, she was grateful for the good things. To sum it up in her own words in her autobiography, “I have had a fantastic life. I have loved and have been loved.”

Nancy and I met when she lived in an apartment in Gig Harbor and she called me to help rescue a cat in her parking lot. She was so worried because she knew where he came from, that hed been mistreated and was ill. I took him, helped him regain health and trust and let him build his strength back up in the Harbor Hope Cat Rescue shelter. He hid in a small wooden boat for the first several days, earning him the name, Gilligan. Nancy moved to Ellensburg, but we kept in touch and I kept an eye...

Nancy played an important role in the woman I have become. She was a surrogate mother figure when I was so very young - so different than anything or anyone I had ever known. My introduction to Nancy was through my childhood friendship with her daughter, Staci. And, while we all grew apart, Nancy and I reconnected some years back and would stay in touch via Christmas cards/letters. She had so much depth to her - an endless ability to make those in her life feel accepted, loved, cherished....

Goodbye old friend, it's been a great voyage with you. I'll see you on the other side of the Rainbow bridge someday. Don't let all those Mickey kitties trip you like Charlie liked to do. I love you!!

I lived with Nancy for a year. She was full of life. She adored her cats, especially Micky. I was introduced to her through the Visers family. Many interesting stories. I will miss her.

While I did not know Nancy personally, I knew her through her daughter Staci, who is a great friend and confidante, to myself and others. Nancy was an exceptional woman, intelligent and independent, before it became "accepted" for women to be that way. She pushed the boundaries and beyond for what was accepted for women, and was definately a woman before her time. She has passed the best of her talents, abilities and intelligence to her daughter Staci Layne Wilson. Of all the...

She was wonderful, charming, fun and loving. I will never forget her. I love you, Nancy.

I have known Nancy for just under a year, but we became very close. I spent 3 days a week with Nancy and few a special bond with her. I feel very blessed to have known such a beautiful kind heated soul. I love you and I will miss you dearly. Mickey and Charlie are with me and my family and we will love them until you are reunited. Rest in peace.

The brightest light on my Christmas tree went out on December 16th. I first met Nancy through Leo Guild, a writer and editor with Holloway House Publishing during the summer of 1957. I met her husband Don Wilson at Nancy's apartment in West Hollywood. I don't remember the occasion, but two things stand out in my mind. First, her ocelot liked the taste of my skin and gorged on a part of my arm. Also, Don said he was with a small musical group. When I asked the name, he said, "The...

What a beautiful tribute. Yes, she was loved! My deepest condolences to her family and friends.

Never miss an update about Nancy. Sign up today.