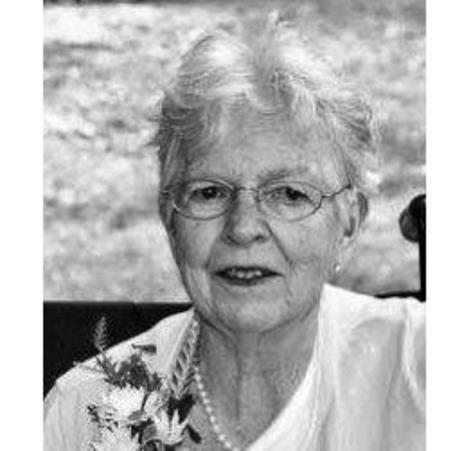 Not the right person? See All ›
LOCATION
Graham, North Carolina

Nannie was born Mar. 16, 1935, in Person County to Theodore B. Dixon and his wife Julia Ann Strayhorn Dixon. She was one of nine children in a family that was struggling through the Great Depression with a series of tenant farming situations. They moved every year or two across North Carolina and down to Florida. Finally, by the early 1940s, the family had saved enough to buy a farm in Saxapahaw.

Nannie put down her roots in Alamance County. Her yearbook photo from Eli Whitney High School notes that she graduated as a married woman, having wed William Henry McBane her senior year. They settled in Eli Whitney and eventually raised three daughters.

Though primarily a homemaker, Nannie took public work through the years, including seasonally at tobacco warehouses and at Eli Whitney's then-new veterinary practice. She worked around the county for the Head Start program in its first year in the 1960s. Later, with her children grown, she took a job at UNC's Student Health Services and eventually retired from the university.

Nannie's greatest fame came from her quilting work. Already a good seamstress, she learned to piece and quilt after she married, mostly from her mother-in-law. For years she taught quilting classes at Alamance Community College, and many who pursue the craft give credit to her early encouragement that "You can do it!" She became a regular at Uncle Eli's Quilting Party, the annual quilting event dating back to 1931. But by then, the quilting party tradition was fading. Women were working; people didn't need to make quilts to keep warm; and then the Eli Whitney School closed. It looked like Uncle Eli's Quilting Party was at an end.

Nannie never met a tradition she didn't like, and this one involved quilting, history, and community, all favorites. Along with quilter Mildred Guthrie and the late Pat Bailey, Nannie kept the quilting party going through some lean years when almost no one showed up. By the nation's bicentennial, however, the craft experienced a renaissance and interest in the event surged. Held by tradition on the first Thursday in April, today it regularly draws a crowd in the hundreds to the old school gym and is considered the oldest quilting event in the country.

Nannie enjoyed traveling on a shoestring and was ready for adventure. When the girls were young, the family roamed all across the state in a truck camper, stopping at every museum and point of interest along the way. Later, after Henry and Nannie retired, they drove across the country several times, visiting friends and relatives. They once carried a bushel of fresh oysters in the shell from the N.C. coast to Kansas, surprising their daughter living there with a taste of home. Another time, Nannie and Henry went to Mexico for a couple months to babysit the children of their niece and her husband, who was working there, while they settled into their new home.

Nannie was a logical, practical woman with a can-do attitude and tried to instill others with the same sense of possibility. She believed problems could be solved and skills acquired simply by reading. She liked "How to fix it" books and would say "Did you look at the manual?" as Step 1 of solving a problem. She was optimistic and slow to give up. She refinished furniture; she canned mountains of vegetables; she sewed clothes; she painted rooms, made curtains and researched genealogies. Not every project was a roaring success, but she rarely considered any effort a defeat.

The greatest sadness of her life was when Henry died suddenly in an accident in 2004. They had been married 52 years. Nannie dealt with her grief in characteristic fashion. She enrolled in a class: "How to be Happy."

In the years since, Nannie adored an evolving circle of friends who met at her house every week as the Monday Morning Quilting Group. Though the gathering turned out to be more a breakfast club than anything else, the ladies would still bring projects that had hit a snag, because "Nannie will know what to do and how to fix it." She also enjoyed her Parkinson's support group, the Saints Alive social group, and her many neighbors who were so kind to her over the years.

Nannie is survived by her daughters Wendy McBane of Saxapahaw and Libby Baity (Bobby) and Kathy Allen (Todd), both of Eli Whitney. Nannie, whose license tag said "Happiness is being a grandparent," was beloved by four grandchildren: Kelder Monar (Heather) of Sylva, NC; Nellie Monar of Saxapahaw; Astrid Monar of Colorado Springs, CO; and Blair Allen (Megan) of Chapel Hill. She held one great-grandchild, Alice Monar, born last year.

She is also survived by her sister Mary Ann Rowland of Henderson and brothers Hoover Dixon of Saxapahaw and Ed Dixon of Durham. In addition to her husband and parents, Nannie was pre-deceased by two brothers, William Dixon and Jake Dixon, her sister Margaret Crutchfield, and two sisters who died in childhood.

A service will be held Tuesday Sept. 15 at 2 p.m. at Moore's Chapel Cemetery in Saxapahaw. Nannie would say it's only sensible to wear a mask and practice social distancing.

The family extends thanks to the many loving caregivers who helped Nannie stay at home through the last 6 years and the hospital staff who cared for her in her final days.

McClure Funeral Service of Graham is assisting the family.

Online condolences may be sent to: www.mcclurefuneralservice.net

Wendy, Libby and Kathy I am so sorry for your loss. Your Mother Nannie Lou was a very sweet lady and will surely be missed. It will be my prayer that God will give you comfort during this time of pain and grief as only He can.

May God bless you and your family in this time of sorrow. Nannie Lou will surely be missed by everyone especially the Saint's Alive group. She was a wonderful lady and loved by everyone who met her. Rest in piece Nannie Lou.

May God bless you and your family in this time of sorrow. She will be missed greatly. Especially in the Saints Alive group. She was a great Lady and everyone could not help but love her. Rest in peace Nannie Lou.

So sorry to hear of Nannie Lou's passing. My mom, Louise Shropshire, was one of those Monday Morning quilting club members. She enjoyed the fellowship & the quilting. Prayers & good thoughts for Miss Nannie Lou's family.

Nannie taught me about quilting. She put together many quilts for me and encouraged me along the way. Nannie was very kind to me and much loved. I am grateful to Nannie for teaching me a a most special hobby. Farewell in the Lord my dear friend.

Never miss an update about Nannie. Sign up today.