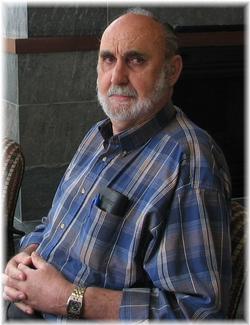 His father was a commercial fisherman and Neil along with his three brothers fished with their father until 1958. At that time, Neil joined the United States Air Force and was a flight engineer from 1958 until his honorably discharge in 1962.

In December of 1956 he was united in marriage to Evelyn Krug and unto this union, four children were born.

He returned to New Jersey and was a commercial fisherman for a couple of years and then entered construction working on building home for two years. He worked for the Coastal Patrol for the state of New Jersey and was also on the volunteer fire department.

In 1976, Neil moved to Warsaw where he worked for Central Bridges on the Harry S. Truman Dam Project. He later owned and operated R & R Heating and Cooling in Warsaw for 30 years, Neil retired in 2005.

In October of 1992, he was united in marriage to Jan Norberg and they made their home in Warsaw.

Neil enjoyed gardening and woodworking. He was a craftsman of model ships and planes. He built one ship model from a kit but felt it was easier to build from scratch. Many were built from a photo or his memory. In 1966, Neil built a twenty-one foot speed boat that he used for pulling fishing nets. He also built a 9' model of the riverboat "Osage" that is currently on display at Eichler Lumber in Warsaw. He also did several oil paintings.

Neil was a member and Past Master of the Shawnee Masonic Lodge # 653 of Warsaw and a member of the Osage Valley Chapter # 502, Order of the Eastern Star, also of Warsaw.

He was preceded in death by his parents, three brothers, Bill, Carl and Raymond, one sister, Vera, and an infant daughter, Bonnie Lee.
He is survived by his wife, Jan, of the home, one son, Neil (Julie) Richardson, Jr., of Cameron, MO, two daughters, Holly (Jim) Morrison of Carrollton, MO, and Donna (Lynn) Crawford, of Jonesville, LA, nine grandchildren and five great-grandchildren, other relatives and friends.

Cremation. Memorial services with Masonic Rites were held at 2:00 P.M., Tuesday, July 22, 2014, at the Reser Funeral Home, Warsaw. Memorials may be made to the Benton County Hospice in memory of Neil.

.Jan sure thinking of you all today.
sure a beauiful picture of him,which it work out to come down.LaMay,northfield mn.

Sorry about Neil...went too fast. We really wanted to come down...hope you will understand.

Sorry to hear about Neil. He was a great person and so good to my daughter, Verla when she came there to be baby sitted. Sincerely,

So Sorry for the Richardson family loss
R.I.P. Neil

Never miss an update about Neil. Sign up today.