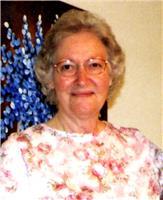 Not the right person? See All ›
AGE
90
LOCATION
SHERMAN, Texas

Sherman- Funeral services for Nellie Faye Stonebarger will be held at 2:00 PM Saturday, January 4 at the Kingdom Hall of Jehovah's Witnesses in Sherman. Bob Reed will officiate. Mrs. Stonebarger, 90, passed away Wednesday, December 25 at Carrus Specialty Hospital in Sherman.
Nellie was born February 19, 1929 in Kenefic, Oklahoma to the late George and Ida (Terry) Hodel. She worked at Burlington Industries and did residential cleaning. Nellie was a member of the Jehovah Witnesses. Her favorite bible verse was Revelation 21 3-4, 3 And I heard a loud voice from the throne saying, "Look! God's dwelling place is now among the people, and he will dwell with them. They will be his people, and God himself will be with them and be their God. 4 'He will wipe every tear from their eyes. There will be no more death or mourning or crying or pain, for the old order of things has passed away." She was waiting on her resurrection.
Mrs. Stonebarger is survived by two daughters, Peggy Stonebarger of Sherman and Reba Frey and husband Ronnie of Sherman; five grandchildren, Jason Carles Sr. and wife, Jana of Sherman, Erin Richardson and husband Michael of Sherman, Ethan Carles and wife Tita of Sherman, Adrian Frey and wife Kenzie of Tom Bean, and Shane Stonebarger and wife Shana of Denison; ten great grandchildren; and one great great granddaughter. She was preceded in death by her husband, Douglas Stonebarger; parents, son, Tommy Stonebarger; daughter, Marketa Carles; and grandson, Brandon Carles.
The family will receive friends from 6:00-8:00 PM Friday, January 3 at Waldo Funeral Home. The register book can be signed online at waldofuneralhome.com.
Flowers will be accepted at Waldo Funeral Home Friday, January 3 between 9:00 a.m. and 5:00 p.m. Also, on Saturday flowers may be delivered to the Kingdom Hall of Jehovah's Witness in Sherman beginning at 12:30 p.m.

Reba an Peggy I'm very sorry for your loss. Reba an Peggy have been the nicest people that I've known over the years.

I just saw this. Reba and knew it must be your mom. I'm so sorry for your loss and sending prayers for your family.

Never miss an update about NELLIE. Sign up today.