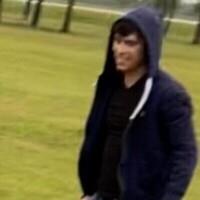 It is with an extremely heavy heart to announce that our beloved Nicholas William Hagan, 26, passed away suddenly on Tuesday, June 30, 2020, while at home with his mother, Elaine Clewell.  He is survived by his big brother Christopher that he so cherished, his caring father, Chris, and Elaine, his loving mother.

Nicholas was born here in Texas on 12/28/93.  My doctor told me that Nick would probably be born on Christmas so that is why I chose the name Nicholas. Even though he waited until 3 days later, he was still the best Christmas gift ever!

Nicholas attended his high school years and graduated June 2013 from Stratford High School.  He was active in Track and Cross Country and was about to be in Varsity until the coach had a meltdown with the whole team.  He always made excellent times and was usually one of the first to finish. I was so proud of him and enjoyed watching him do what he loved to do. I attended every single event without fail!  He loved running and wanted it to be a lifelong health choice.

Nicholas made many friends in high school and remained friends still. He was a wonderful and extremely kind young man with a smile that could light up any room! He was loved by just about everyone who met him. He loved life and cared so much for family and others. His greatest music love was for the band called Tool (MJK)! I was even lucky enough to go with both of my sons to their concerts TWICE!! They are some of the best memories that I’ve been blessed with. This was a classic Tool on the brain guy but it made me smile to see him enjoy things in life. I used to love listening to him singing to their songs with so much feeling.

The last few months it seemed we were inseparable spending almost many hours catching up on shows that we kept up with and starting new tv series. It was a great bonding time and I will cherish it forever. I don’t want to forget to mention Nicks best fur buddy Chance. They both had a loving bond and many times Chance would sleep right next to Nick. I can tell that Chance feels Nicks absence and I sometimes find him laying right on Nicks pillow. Nicholas had a great love for dogs.  During many of our talks, he spoke about his dream of buying land so that he could open a dog rescue/refuge. I applauded the idea and volunteered to do my part.  I pray this is something he will be able to do in heaven.

I miss his good night hug and “I love you mom” every night,  without fail as he got ready to go to sleep.  And each day when I woke up I would find him in the living room with his headphones on and playing his game. Now, I kiss his pillow and say I love you Nick and still expect to see him right there playing that Xbox. I don’t think that will change.

I LOVE YOU MY ANGEL!

Nick, I’m so sorry it has taken me this long to write to you. I just didn’t have the words to express how I felt. Honestly, I’m still struggling with it. I’m going to miss all of our talks and jokes. Discussing life and goals. You brought such a bright light everywhere you went. I’m going to miss that big smile and your kind heart. Devastation doesn’t even begin to describe what I felt when I heard the news. I refused to believe it at first. That was by choice because the pain was too much to...

Nick was a great guy. He was very compassionate and had such a big heart. He always went out of his way to do things for people. I wish I knew Nick when I was younger but I can imagine that even as a young child he filled a room with happiness and joy. I was very shocked to learn about his passing, it's truly a tragedy. Rest in paradise Nick, love you, man.

Nick was one of my best friends growing up! He lived down the street from me and we always would ride bikes together and walk home together sometimes. He was always so nice and a great friend, my mom loved having him over, and I definitely missed him when I moved Freshman year of High School. I'll always remember his kindness, fun, and thoughtfulness. He was a great person and will be dearly missed. I love you and miss you Nick

Nick was an amazing friend with an incredibly kind heart and soul. He had the most genuine smile that could light up a room. Thank you for being such an incredible friend and always motivating me to be the best I can be. I will miss you dearly

I always feel such a soft spot in my heart when i see nicholas's pictures. Your smile is contagous. I love that we where able to connect again! You are so so so loved! You will always be in that soft spot of my heart. I love you

Nicholas was a kind hearted loving boy.
So much fun to be around and an infectious smile.
Your love for all those who surrounded you remains as well as the love each had for you in return.
You're so loved and will be missed but never forgotten.

My prayers are with you Elaine, I cannot imagine the pain you are going through. No mother should have to bury their children. May God give you strength and healing.