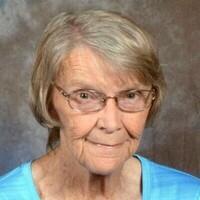 Mrs. Scott was born June 24, 1943 in Hughes Springs, Texas. She was retired from Smith-Blair, was a member of the First Baptist Church, Linden and attended the Northwood Presbyterian  Church.

She was preceded in death by one son, Michael Lee Scott and a sister Minnie Lou Harris.

Graveside services will be held at 11:00 A.M. Wednesday at the Northwood Moores Chapel Cemetery with Dr. Cheryl Bourne officiating. Burial is under the direction of Texarkana Funeral Home, Texas.

Granny. I miss you more and more each day. I love you so very much. I'm going to miss our phone conversations. Learning about our family tree. Hearing old stories about the older generations in the family. I hope I made you proud. Save me a spot next to you up there.

So sad to hear of her passing. I am remembering PTA times at Red Lick with her. We spent quite a lot of time together back then. My sympathy to her family.

We will miss your smile Ms. Jean! Rest in peace.

So sorry to hear about Nola Jean. She was a dear friend and classmate. Prayers for all of the family in this difficult time.

Our hearts are broken to hear of Nola Jean’s passing. We have so many wonderful memories of her at the flower shop. You are all in our thoughts and prayers.

I'm so sorry for your loss, Mrs. Scott was a vibrant individual and we always enjoyed her company.

Never miss an update about Nola. Sign up today.