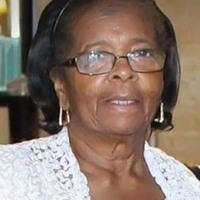 Omega Prioleau, the eldest daughter of the late Chance and Orene Gadsden Prioleau, was born in Russellville, South Carolina on December 8, 1941.  As she blossomed, her family instilled their love and an abundance of knowledge that would last a lifetime.  She departed this life on October 14, 2020.

Omega  grew up in a Christian home and accepted the Lord at an early age, as her personal Lord and Savior, under the Day Dawn Baptist Church membership.

Omega graduated from Russellville High School in Russellville, SC (now St. Stephen, SC) receiving her achievement in 1960.  After high school she moved to New York City seeking a greater opportunity for herself and her family.  She always was a giving person.  While in New York City, she was a loyal employee for Pilgrim Laundry, Riteway Laundry and retired from The Health and Racket Club.

After living in New York City for forty-four plus years, Omega relocated back home to be with her son and loving family.  While in New York City, she became a member of Friendship Baptist Church and after returning home she renewed her membership at Day Dawn Baptist Church under the leadership of Reverend Joshua Prioleau.

Omega loved to talk and talk and talk.  She was never a stranger to anyone.  Her smiles were contagious.  Rather than being a sit-at-home retiree, Omega joined the Berkeley Senior Center in St. Stephen, SC.  There, she gained hobbies of word search and bingo.  Within the family she was known as being the “Queen of Bingo”.  Omega enjoyed the Senior Center so much that she would refer to it as going to school because the bus came to pick her up.

Omega’s favorite saying was “Lord have mercy”.  She was a sweet spirited person and she instilled this in her son and grandchildren.

Omega was preceded in death by her mother, father, and sister Dotsey Robinson.

As per CDC guidelines, please wear a face mask and practice social distancing at both the viewing and the graveside service.

"Forever in our hearts!"

To the family and friends of cousin Omega, I'm so sorry to hear of her passing. She was always such a positive and loving person. She had a beautiful soul and she will be missed. I pray that God continues to comfort you and be with you in these dark hours.

Expressing my deepest condolences to the family I am so blessed since birth to be apart of Aunt Mega will be deeply missed I cherish every memory every laugh ( there were plenty) every long conversation and trips from Brooklyn to St. Stephen with Momma Dotsey! I'm praying for your strength family and I love you all

Sending my deepest condolences. My prayer is that God continue to give you the strength to persevere even in the late midnight hour hold on to God’s unchanging hand.

Scott, I'm so sorry to hear about the passing of your Beautiful Mom - MS. OMEGA PRIOLEAU. May your heart soon be filled with wonderful memories of joyful times together as you celebrate a life well-lived. ❤

To Scott and family, I was so sorry to hear of the passing of cousin Omega. I have known her all of my life and she was a kind and loving lady. I will miss her smile especially when she and Dot were together. May the love of God sustain and strengthen the entire family during your time of loss.

Our condolences to the Prioleau family May you be surrounded by the peace of the holy spirit during this your time of sorrow.

My deepest condolences to the family. May God shines his perpetual light on the family and give you strength and love each day.❤

Thinking of you all in sympathy and lifting you up in prayer. Extending sentiments of love, comfort and peace to the Prioleau family during this difficult time. May God strengthen, bless and keep you in the days ahead. ❤

Never miss an update about Omega. Sign up today.