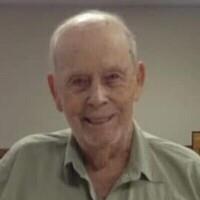 Ray attended Whitehouse schools and joined the US Air Force, at the age of 17, on November 24, 1942. He proudly served his country until he was honorably discharged on September 20, 1945.

He served in WWII in Europe, stationed at Horsham-St. Faith Airfield, Norwich England from January 4, 1944 until December 27, 1944 where he achieved the rank of Staff Sergeant. He was assigned to the USAAF 458th Bomb Group, 753rd Squadron, and participated in over 30 combat bombing missions above France, Germany, and Holland. His military specialty was Waist Gunner/Belly Turret Gunner on the B24 “Liberator”.

He was presented the Purple Heart on 2 separate occasions; the first, after having been shot down on his initial combat mission. He was also awarded the Distinguished Flying Cross, the Army Air Medal with 5 Oak Leaf Clusters, and the EAME Campaign Medal with 3 Bronze campaign stars.

On June 2, 1972, he and Nancy Newkirk were married. They enjoyed traveling, and often took local teens from their church on trips with them. As members of First Baptist Church in the 70s, they completely funded a building for the youth called The Lighthouse. They were the “adopted” youth directors at the time, because the teens of the church loved Ray and Nancy dearly.

Ray was an integral part of the Whitehouse community. He served on the Board of Trustees for Whitehouse ISD from 1964-1972 and was a founder of City National Bank in Whitehouse. He was a member of the Masonic Lodge for over 65 years. He and Nancy owned Terry’s Plant Farm and made many friends through that business. Ray and Nancy were selected as Mr. and Mrs. Yesteryear in 1998 due to the many contributions they made to the city of Whitehouse. They remained involved in community activities until Nancy’s death on January 18, 2006.

Ray believed a handshake was your word and he was generous to a fault. For many years, during the Christmas season, he wrapped and delivered fresh fruit baskets to area families and he bought Greenburg turkeys for over 20 families each year. As late as last fall, he was still delivering donuts regularly to the employees at the local bank, the post office, and any where else he thought a sweet treat could bring a smile.

He had a remarkable sense of humor. And his witty remarks always brought smiles and/or laughter. He was most displeased that society had moved from “breakfast, dinner, and supper” to “breakfast, lunch and dinner”. He often remarked that we had “thrown supper under the bus”.

Some years ago, a large tree fell across the bed of his truck just behind the cab. The truck was totaled, but Ray bought the salvage and continued to drive it just as it was. He said it was the first time he could just reach over and get something out of the bed. And it created conversations and friendships wherever he went when someone would ask, “What happened to your truck?” Everyone in Whitehouse knew him by that truck.

Ray was a devout Christian and never wavered in his spiritual beliefs, even when times were difficult. He truly lived and breathed the Word of God. When he became unable to attend church in person, he watched messages on Sunday morning television. He also loved good, Christian music and knew the words to most every song by The Gaithers, Ray Boltz, and The Cathedrals, among others. He knew the Bible well, having read it cover to cover numerous times. He could not only quote scriptures but could explain them as well. He encouraged every person he met to read Psalm 139. (He would be pleased if you would, too.) He said that every morning when he awoke, he asked the Lord to let him be a blessing to someone today. His life was his testimony.

Ray loved the Christmas season, and for many years his home was bathed in Christmas lights and decorations. Family after family drove through his circle drive to admire his work. A local TV station interviewed him in December 2020 about his endeavor and he was so pleased that the interview increased the number of families coming around his driveway. His yard had thousands of lights, and he left many of his interior decorations out all year long. He loved Christmas as much as any child.

Masonic graveside service will be held on Wednesday, May 12, 2021 at 10:30 am at the Whitehouse Cemetery. Von Dawson will officiate.

I had the pleasure of being Ray & Nancy’s server at IHOP for many years. In later years it would be Ray, Ronnie, a nephew and sometimes 1other. Always a fun time. RIP my friend

I worked for Mr. and Mrs. Terry off and on for several years when they had the plant farm on Hagen Road. My parents would always go from Tyler to Whitehouse to buy plants from them when the plant farm was over by the Whitehouse Junior High. I found out about his passing as I was actually going to visit him at his home today and saw many vehicles there. I then went to the cemetery because I knew where his family was buried and saw the flowers on his grave..... needless to say,I was very upset...

Thank you for the wonderful memories of my child hood summer vacations with You and Nancy , and the strong Christian example you both set for us all throughout my lifetime. Fly high with Jesus, my sweet friend.

Mr. Terry was a special friend to me and so many others. I’m very thankful I knew him!

I loved Mr. and Mrs. Terry, they were a blessing to every single person that crossed their path. We first met them at the little white church on Copeland then they were tireless workers in the building of Gateway Baptist Church. Their faith and devotion never wavered.

Ray and Nancy were very special to us in our years at Sylvania. He was such a kind and funny person. Heaven is richer now.

Condolences to the family from the Cash family.
My husband has been doing handyman work Mr. Terry for the last four years & always enjoyed his time with him. I remember Mr. Terry from my childhood growing up in Whitehouse, before moving to Chapel Hill.
He was a great man & I am thankful knowing that he is with our Savior in Heaven today.

Never miss an update about Orville. Sign up today.