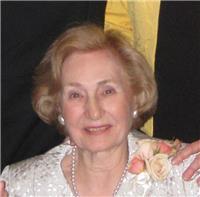 Not the right person? See All ›
LOCATION
Lake City, Florida

Ouida Powell Hanna
Ouida Powell Hanna, 98, passed away peacefully on July 19, 2020, at her home in Tampa, after a long decline. She was born in Brinson, GA in 1922, to William Jefferson and Minnie Wells Powell. She graduated from Brinson High School and Georgia State Womans College (now Valdosta State University). She met her future husband, James, in Bainbridge, GA, when he became principal of the high school where she had begun teaching in 1941. They married in 1942, and, after he received his commission in the Army Air Forces, they were stationed in Oklahoma City, OK for 4 ½ years. After the war they moved to Gainesville, FL, for Mr. Hanna to attend graduate school at the University of Florida, and their three daughters were born there. The Hannas then lived in Live Oak for a decade, but settled in Lake City in 1962, where Mrs. Hanna taught school for 24 years, both as a classroom teacher at Eastside Elementary School and as a reading specialist for the county school system. She was former president of the local chapter of Alpha Delta Kappa, an international honorary organization of women educators, and was selected three times by her peers as Teacher of the Year at Eastside Elementary. She was at her best teaching young students in the classroom and was an especially gifted reading teacher. She lived her belief that a good, devoted teacher can change a child's life, not only by imparting academic skills, but also by encouraging every child to believe in his or her own unique abilities. After retirement, she relished her role as a doting and generous "Nana" to her five grandchildren, and then to her two great-grandchildren. They marveled at her longevity which enabled her to see them grow into adults and even begin their own families. Her daughters, grandchildren, and great-grandchildren will miss her unwavering love, her passionate belief in the blessings of a strong family, and her dedication to raising well-educated, independent children with a devotion to their own families, and to hard work. Mrs. Hanna was a member of St. James Episcopal Church, which she enjoyed attending with her daughter, Patti. In 2016, after 54 years in Lake City, she moved to a retirement community in south Tampa to be near her daughters, Linda and Jeanie. She was active and healthy there, well into her mid-nineties.
Her husband, James E. Hanna, predeceased her in 2007.
She is survived by three daughters and two sons-in-law: Linda Hanna and husband Joseph Hafner, Jeanie Hanna and Page 2 of 2 husband Stamatis "Matt" Valaes, all of Tampa, and Patricia "Patti" Roper of Lake City; five grandchildren and their spouses: Sarah Kate Snyder and Mike, Matthew Roper and Asia, Elizabeth Hanna-Owens, William Roper and Brittany, and Patrick Hafner and Jennifer; as well as great-grandchildren William Liam Snyder and Madeline Snyder.
The family would especially like to thank her devoted caregivers: Mireya Garces, Zenaida Ivos , and Yvonne Daley, as well as the Garnet Team of LifePath Hospice, especially Steve, Chuck, Shantell, Sister Marie, and many others.
A private, family funeral will be held in Lake City on Friday, August 28, at 2 p.m., at St. James Episcopal Church. The funeral will be live streamed on the church's Facebook page for St. James Episcopal Lake City, Florida. In lieu of flowers, donations may be made to St. James Episcopal Church, Lake City, Florida, or LifePath Hospice, Garnet Team, Tampa, Florida.
Arrangements are under the direction of GATEWAY-FOREST LAWN FUNERAL HOME, 3596 S US Hwy 441, Lake City, FL 32025. Please leave words of comfort for the family at www.gatewayforestlawn.com.

I had the privilege to be Mrs. Hannah's neighbor for 7 years. I moved to Lake City in 2009 and she came over to meet me and to see who had moved in next door. She was one of a kind, a very special lady and she will be missed by everyone. I was blessed to have known her.

No one can prepare you for a loss; it comes like a swift wind. However, take comfort in knowing God is with you and your family lean on him in your time of need & remember,

Never miss an update about Ouida. Sign up today.