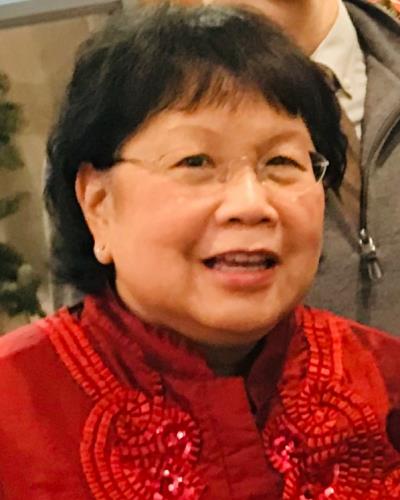 Not the right person? See All ›
LOCATION
Wilmette, Illinois

Pamela Lung-Hui Shu, 67, died at home from cancer, surrounded by family and friends. Pamela was the daughter of Chang -Yui Shu and Mildred Tie Ten Quee, both Scottish-educated physicians, and the sister of Michael (Olive), Rosemary Cleaves (Thomas) and Alexander (Jessie). Shu was very happily married for 39 years to Karl Bowen Anderson, with whom she proudly raised two loving sons, Eric Shu Anderson and Evan Shu Anderson. Born in Washington, D.C., Pamela grew up in the Philippines and Hong Kong. In 1966, Ms. Shu and her family moved to the United States, where they settled in Skokie, IL. Pamela graduated from Evanston Township High School, earned her BA from Northwestern University, and her JD from John Marshall Law School. Shu worked as a litigator for 30 years, including as an Assistant Attorney General and an Assistant Cook County State's Attorney early in her career. She spent the remainder of her professional life in regulatory enforcement of the investment industry, working at the National Futures Association and FINRA in Chicago. After retiring in 2011, Shu volunteered for seven years at Legal Aid Chicago, where she helped provide free legal assistance to those in need. She actively supported John Marshall Law School, where she served on the Board of Visitors for 20 years. Shu attended St. Augustine's Episcopal Church in Wilmette with her family for 27 years. She served on the Vestry and Altar Guild, and served as a Warden, Sunday School teacher, and youth leader. She co-chaired the church's Plant Sale fundraiser and Christian Outreach Commission for many years. Shu worked as a Commissioner of the Wilmette Human Relations Commission and served on the Before-School Foreign Language Committee for Harper Elementary School, where she helped introduce foreign languages to children at an early age. Aside from work and volunteering, Pamela traveled the world, attended concerts throughout Chicago, studied Spanish, cultivated a beautiful garden, and hosted countless dinners for beloved family and friends.

Pamela Shu was a wonderful, steadfast volunteer at Legal Aid Chicago for 7 years (during a time when I was the Executive Director there). She took cases from all over the agency, and made a difference to all the families she worked with. She also introduced us to her church community, and won support for our work from them. She was a connector a person who created ties wherever she was. We will miss her.

Wishing well of you and your family in this time of loss.

Never miss an update about Pamela. Sign up today.