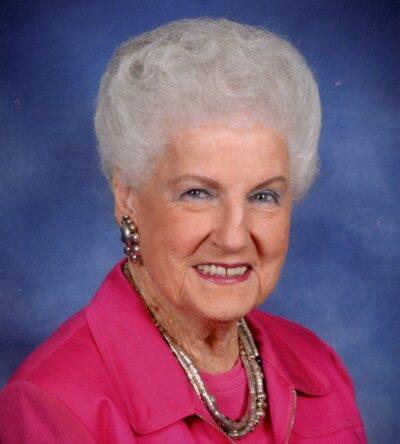 In 1930, Dr. Horton moved his medical practice from Murchison to Brownsboro, Texas.  Pat graduated from Brownsboro High School and Tyler Business College before moving to accept an office job in Orange, Texas.  There she met the love of her life, Robert C. (Dutch) Kromer from Hershey, Pennsylvania.  “Dutch” was a World War II Navy combat veteran and was briefly stationed in Orange, where he met Pat at a USO show.  It was love at first sight.  They were married in 1946 and then settled in Tyler after Dutch completed his education.  Dutch and Pat lived their entire lives in Tyler, raising their children Rob and Patti.  The family was longtime members of St. Paul United Methodist Church, first joining the Church in 1957.

During her life, Pat enjoyed crafts, attending garage sales and collecting antiques; and most importantly, casting a huge sphere of love and support for all who knew her.  A conversation with Pat was one where you always left feeling better about yourself.  Pat practiced her Christian faith by work, words, deeds and example.

Pat is preceded in death by her mother, father and 11 brothers and sisters.  Her death completes the circle of life for the Dr. A. C. Horton family, but only on this earth.  They are all happily together again in Heaven.

I am fortunate to have known Pat almost all of my life. She was a blessing to our St. Paul family and to all who knew her. It was always a happy event when I saw her at St. Paul or around town.

Pat was such a loving, caring person.She was the first to let you know you were so important to her.My parents were her neighbors and friends for many years. She was always there to offer anything that she thought might help them in anyway.During their illnesses and deaths she was always such a blessing to my family.Pat and Dutch were a treasure in my life.I will always love them dearly and miss our many talks.Pat loved her family and she was soo proud of all her kids.To Rob and Patti my...

Pat and Dutch lived next door to my Grandparents in Tyler. I remember as a little girl always feeling like I got to visit two sets of Grandparents when I was in Tyler. They were both always so kind and caring. Our family stayed in touch for many years. Pat was such a bright and loving person!! She adored her family and always loved sharing stories about them. I know she is rejoicing in heaven with Dutch and her neighbors Otto and Irene. I pray that the Lord gives you comfort and peace during...

I did not have the pleasure of knowing Pat for very long. She was my neighbor while in Allen, Texas. I knew the minute we met she was a very special person and enjoyed visiting with her in her apartment or during meals. I feel my life is better for having known her. Before I went to visit my children Christmas Eve I stopped by her room to wish her Merry Christmas not knowing I would not see her again in this life. I will miss the sweet lady down the hall. Patti, Rob and their families...

Pat was one of the sweetest ladies that I have ever met. She was a beautiful person inside and out. Always uplifting! Love and prayers to Rob, Patti and family.

Aunt Pat had a unique way of making everyone feel welcome and cared for. I always enjoyed being around her. My mother and Uncle Dutch were both from Pennsylvania, so I felt like I had a lot in common with Aunt Pat and the family.

It was a blessing to know Pat . Her smile, conversation and love for others encouraged all who knew her. It was my blessing to be her pastor at St Paul United Methodist Church.

Pat worked for my mother at Tyler ISD. Pat always had her home decorated real pretty. When I was in elementary school when I would get out for Christmas Break, she my mother and I would go somewhere for lunch. After lunch we would go to a shop called The Gray Pony. We would do a day trip during the summer. We would have lunch and do some rummaging.

Aunt Pat was truly one of the brightest and kindest of people. I always left her home feeling happier.

Never miss an update about Patsy. Sign up today.