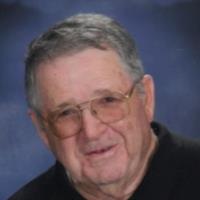 Paul Rolph was born in Luverne MN June 4th 1938 to Blanche Chattell and Lemuel Rolph. He was raised on his family farm near Hardwick, MN. He was one of four brothers and had four sisters. Paul went to school through 8th grade at District 55 in Hardwick and then graduated Luverne High School in 1956. He attended University of MN for Veterinary Medicine and graduated in 1962.
On July 17, 1965, Paul was united in marriage to Mryna Benson. This union was blessed with over 54 years of marriage, three children, and five grandchildren. He was employed in Benson after graduation where he practiced veterinary medicine with Kufrin and Johnson and then practiced alone for several years until James Thelen became a partner. Paul practiced as a Veterinarian for 35 years, retiring December of 1997.
He enjoyed retirement by going to garage sales, auctions, starting many collections of beautiful glassware, old toys, and whatever else caught his eye. He also enjoyed buying old furniture and refinishing it, always so amazed to see the beautiful wood under layers of paint or varnish. In the summer, he enjoyed fishing, and the garage was his man cave and happy place. Paul’s children and grandchildren were his pride and joy. He especially enjoyed having coffee with a good friend Chip Dale weekly. Paul was a member of the Benson Jaycees, the Benson Lion’s Club, and he served two terms on the Benson HRA Housing Board. On May 18, 2019, Paul and Myrna moved to Woodcrest in St. Joseph, MN. He was called from this life on Friday evening, June 12, 2020 at the St. Cloud Hospital. He attained the age of 82 years and 8 days.
Paul is survived by his wife Myrna of St. Joseph; his three children: Rochelle (Marty) Kennelly of Bemidji, Dr. Bryan (Amy) Rolph of St. Cloud, and Shauna (Wayne) Paler of Annandale; five grandchildren: Wyatt, Morgan, Marcus, Carson, and Jaxson; a sister Albertine Appel; and several other relatives and friends. He was preceded in death by his parents Lemuel and Blanche; his brothers: Jerome, Phillip, and Stanley; and his sisters: Kay Sehr, Margaret Kasemodel, and Virginia Kuske. Blessed be his memory.

Myrna and family, sad to hear of the passing of Paul (DR Rolph) my husband and son always looked forward to the visits from him as he helped care for our hogs. He had many stories to tell, while he did his work and always
lifted our spirits. I had the pleasure of working with him as he served on the HRA Board for many years. He was always forward looking and willing to help in any way. We would also have many visits at the auction sales. He left a great legacy and we all have been...

I am so sorry for your loss Mryna and family. May your many happy memories lift you up on the difficult days ahead.

Dr. Rolph was my Vet for several years and I so appreciated his sense of humor and like so many times we would discuss current events that took longer that it did for him to treat my cow or sick hog. I always enjoyed to see him roll on the yard and his visits that would follow. He was a good man and will be missed! Rest in peace Doc.

My deepest sympathy to Mryna and family, I was honored to know and care for Paul over the past year while at Woodcrest. He always had a smile to share, simple words of wisdom and was proud of his family. May he rest in peace.
Mindy Hellermann, RN
Centracare Home Care

My sympathies to the Rolph family. He was a good man and a caring veterinarian. Treasure the good memories you have. Sincerely, Linda Forbord Hanson

Glen and I want to extend our sincere condolences to the whole family in the passing of Paul Rolph. What an awesome man leaving behind an awesome family. I have so many wonderful memories with you all that I will forever cherish. Our thoughts and prayers are with you at this difficult time.