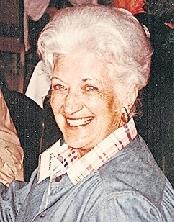 Not the right person? See All ›
LOCATION
Wichita, Oklahoma
CHARITY
The Charity of your Choice
Make a donation

WICHITA, KS
A native of Elmore City, Oklahoma and a citizen of the Chickasaw Nation (Native American), died at home on February 10, 2020, after a remarkable 98 years. Visitation will be 4:30-6:00 PM Friday, February 14, at Downing & Lahey East Mortuary, 6555 E. Central, Wichita, Kansas. A memorial service is planned for 10:30 A.M. Saturday, February 15, 2020, at Riverwalk Church of Christ, 225 N. Waco, Wichita, Kansas. Paula graduated from Oklahoma State University with a degree in Home Economics in 1943 and married Sterling V. Varner in 1945. Prior to the birth of her two children, Paula was a public-school classroom teacher in several Oklahoma school districts as well as the Wichita, Kansas Public School System. During her classroom tenure, she was also involved in teacher training supervision for the University of Oklahoma, Oklahoma College for Women and Wichita State University. In 1943 she was named the Outstanding Home Economics Teacher in the state of Oklahoma. After she left the classroom, Paula devoted her time to her family, church and community serving as PTA President, Camp Fire Girl and Cub Scout Leader, and as a Sunday School Teacher. As her children grew and left home, she expanded her community service and served on the Boards of The Friends of the Wichita Art Museum, The Wichita Center for Arts and Botanica Wichita Gardens. She was elected as President of the Friends of the Wichita Art Museum twice, serving in both 1983 and again in 2003. Paula has also served as President of the Association of Women for Christian Higher Education which benefited both Oklahoma Christian College and York Christian College. At the time of her death she remained an active member of the PEO and the Riverwalk Church of Christ in Wichita. Paula's volunteer service garnered community recognition including the 2006 Volunteer of Excellence Award from the Wichita Art Museum and, with her husband Sterling, the Wichita Arts Council Arts Advocate Award for 2006. She was the Holiday Tables Volunteer of the Year at the Wichita Center for Arts in 2007 and has been named Distinguished Service Honoree for the Wichita Art Museum. The Association of Fundraising Professionals named Paula and her late husband, Sterling, as the Outstanding Philanthropists of 2016. From these activities and associations grew a large circle of friends that enriched her life in later years. Her Church activities, Panera coffee group, the Pink Flamingoes, birthday club, and bridge club, all ensured she would stay busy, and remain in touch. Paula was married to Sterling V. Varner until his death in 2009 and has continued to operate their Shadow Valley Ranch since his death. She is survived by her daughter, Jane Beard of Abilene, Texas; her son, Richard Varner; and niece, Melinda Fultz, both of Wichita, Kansas. Also surviving are her five grandchildren, Sterling Beard of Arlington, Virginia, Hudson Beard, M.D., Morgantown, West Virginia, Ryan Marie Brooks, London, England, Richard Reid Varner, Dana Point California, and Emily Nesmith, Ballard, Washington; and her four great-grandchildren, Avery Grace, Chase, and Henry Brooks, and Richard James Varner. The family would like to express its sincere appreciation to Bob Moore and all of her devoted caregivers. Her "Redshirt" team from Interim Healthcare, was loving, patient and professional. Bob's many years of compassion and selfless dedication to her well-being extended her life and happiness. In lieu of flowers, memorials may be made to a charity of the donor's choice or in Paula's honor to Goodwill Industries of Kansas, 3351 N. Webb Rd., Wichita, KS 67226. Share tributes online at: www.dlwichita.com
Read More

Richard,
So sorry for your loss. Your mom lived a full life and proud life.

She, you and your family are in my prayers. Tom Blair

Richard and Jane, we are so sorry for your loss. Your mother (and father) left a huge mark on so many lives, ours included. It was a blessing to know them both, and it is our prayer that wonderful memories and the eternally true promises of our Lord and Savior will comfort you and your families in the coming weeks and months.

The Southeast Class of 1971 sends our condolences to the family.

Never miss an update about PAULA. Sign up today.