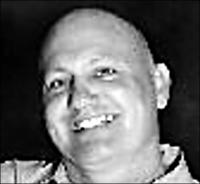 Not the right person? See All ›
LOCATION
North Andover, Massachusetts

Devereaux, Peter C. Of North Andover, MA, age 52, Marine, Boxer, Male Breast Cancer Awareness Advocate and Long Distance Runner. After a long battle with male breast cancer, Peter passed away surrounded by his dedicated family. Pete was the son of Edward and Theresa Devereaux, and grew up in Peabody. He was a champion Golden Gloves boxer and a fantastic endurance athlete. Pete served his country proudly as a U.S. Marine. He was a hands-on guy who was a skilled landscaper and later a machinist. After being diagnosed with breast cancer in 2008, Pete became a tireless advocate for breast cancer awareness, speaking all over the country. Pete is survived by his devoted wife, Fiona Maguire and daughter, Jackie; brothers, Paul, Ed and Joe; sisters, Debra, Cathy and Theresa, and many nieces and nephews. Family and friends are invited to calling hours on August 24, 2014 from 2:00 – 6:00 p.m. at the Conte Funeral Home, 17 Third Street, NORTH ANDOVER, MA. A funeral mass will be celebrated on Monday, August 25, 2014 at 10:00 a.m. in St. Michael's Church, 196 Main Street, North Andover, MA. Burial will follow at St. Mary's Cemetery in Salem, MA. For online condolences, please visit our website at: www.contefuneralhomes.com. In lieu of flowers, donations can be made to the Peter C. Devereaux Fund, TD Bank North, 451 Andover Street, North Andover, MA 01845.

I admitted and cared for Peter during one of his hospital stays. We had some great conversations that I still remember well.... My amazement at his endurance running, his experience as a male breast cancer awareness advocate, his time at Camp Lejeune, and the Semper Fi: Always Faithful documentary. Then his family came to visit and the conversation turned to cooking and swapping recipes. What a nice family and what a great (and inspiring) man. It was an honor to care for Peter. He won't be...

My deepest sympathies to you during this difficult time. I met Peter through the One-to-One Program and I feel blessed to have gotten the chance to know him.
His courage and strength was an inspiration to us all and we will do our best to continue to spread his message of hope. He was truly one of the greats and will be so missed by all in our group.

Pete gave us a wonderful gift - his big smile and determination to make a difference after his diagnosis were inspiring. May he rest in peace.
R. Clapp

I am remembering Peter for his helpfulness to other patients and the sense of humor he constantly displayed. I think of my relationship with him as one of the most meaningful during my work at Dana Farber. I extend sincere condolences for your profound loss.
Pat Kartiganer

My deepest condolences go out to Peters family and the Pink Angels that he loved so! The inspiration and strength that was this amazing man will carry on upon the foundation of love that is his legacy.

Pete was a wonderful, vibrant man full of life and an inspiration to all who knew him.
The world is a little lesser without him. He will be greatly missed.
My heartfelt thoughts are with his family.

Take comfort in knowing that now you have a special guardian angel to watch over you.

Fiona, Our thoughts and prayers are with you and your family during this difficult time. Peter was an amazing man.

Growing up in Peabody, it would be hard to find anyone around Peter's age who hadn't heard of Peter Devereaux. There weren't many kids who boxed and were so successful doing it. I first met Peter, however, at a condo project in Charlestown. I was immediately struck by the light in his eyes and then a smile that could win anyone over. He was tough as nails but easy going, a real man's man! I haven't seen him in years but will always consider him a friend. He was one of a kind and I know he...

Never miss an update about PETER. Sign up today.