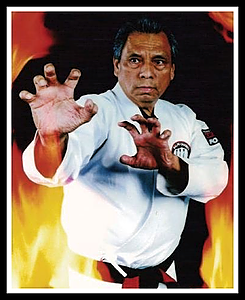 Not the right person? See All ›
This has not been verified by Legacy.com or our partners.
BORN
December 30, 1931
DIED
February 25, 2019
AGE
87
LOCATION
Antioch, California

Born in 1931 in Honolulu, Hawaii, he was of Hawaiian-Spanish descent and one of eight children. His martial arts training began as a young boy learning the fundamentals of boxing from his father, a well-known boxer on the island, who earned the nickname, "Boss."

After serving in the military during the Korean War, Ralph Castro learned Kenpo Karate under the legendary, Professor William "Thunderbolt" Chow at the renowned Honolulu Self-Defense Club.

Several years later, he relocated to the mainland and in 1958 Ralph Castro opened the first Kenpo Karate school in Northern California. He made the decision to start his first location in San Francisco with the encouragement and support from his good friend, also a local boy from Hawaii, Ed Parker, the founder of American Kenpo.

Through the years, Great Grandmaster Ralph Castro has taught tens of thousands of students, promoted hundreds of Black Belts and inspired generations. His martial Arts career spanned over five decades and within that time he was featured in many martial arts publications including numerous magazine covers.

Although Ralph Castro was a pioneer, a warrior and a charismatic martial arts legend, he was first and foremost a devoted husband, a loving father and a true family man. He is survived by his wife, Pat, of 65 years and his Magnificent Seven; April Castro Herschend, May Castro Manner, R. Robert Castro, June Castro Michalowski, Rafael Boss Castro III, July Castro Steinhorn, Mia Castro Havens, 22 grandchildren and 6 great grandchildren.

Due to the overwhelming outpour of love and support for Great Grandmaster Ralph Castro, a memorial fund has been established. These contributions will help cover his memorial service and medical expenses.

If you would like to contribute to Great Grandmaster Castro's memory, please click the button below or visit: gofundme.com/great-grandmaster-ralph-castro-memorial-fund

For those looking for more information about Great Grandmaster Ralph Castro's legacy and the Celebration of Life are encouraged to visit: https://ralphcastro-shaolinkenpo.com/

Grandmaster Ralph Castro taught me that Karate was not just self defense, but a way of life. Everything I was taught by Grandmaster made me what I am today. I have passed my knowledge of Sholin Kenpo to all my Kajukenbo students and fellow blackbelts. I will be forever grateful for all Grandmaster has done for my life. My love to the Castro Family.

a tremendous mentor to alot of us, ,gracious and giving, never to be forgotten
Prof. James Muro--Chow-Hoon Ohana