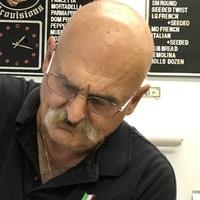 Ralph Losanno, 69, of Bedminster, passed away on Thursday, February 11th. A Visitation will be held at the Rossi Funeral Home, 1937 Westfield Ave. Scotch Plains, NJ on Monday, February 15th from 2-4 pm & 7-9 pm. A Funeral Mass will be celebrated on Tuesday, February 16th at 12 pm at St. Bernard's Church, Plainfield, NJ. The Interment will follow at Hillside Cemetery, Scotch Plains, NJ. The family has requested that donations be made to Gamblers Anonymous International Services, 4981 Irwindale Ave., Suite 700, Irwindale, CA 91706.

Ralph was born in Plainfield, NJ and raised in Springfield, NJ. He was a talented athlete and a star member of the football, baseball, and basketball teams at Jonathan Dayton Regional High School in Springfield, NJ. He could make anyone laugh and people were immediately drawn to his outgoing personality, clever nicknames, and ability to bond with anyone.

Ralph and his wife Cyndy were the third-generation owners and operators of Florence Ravioli in Scotch Plains, NJ from 1976 until his retirement in 2019. The business was a staple of the area for generations. Ralph was a member of Gamblers Anonymous where he sought to help others learn to live with addiction. He served as an inspiration to many and recently celebrated his 25th anniversary with the program. Whenever possible Ralph would be golfing with his friends. He was always up for 18 or even 36 holes.

Cindy, I just noticed that your dear husband, Ralph, passed away recently. I was a steady customer of Florence Ravioli starting when Ralph’s parents ran the business and then when you and Ralph took over. We moved to Pennsylvania in 2009 and missed shopping at Florence Ravioli. You and Ralph did a wonderful job following in the family business. My deepest sympathy to you and your children. Don’t know if you remember me. May God bless you! Gloria Ryniak (I am on Facebook if you want to...

Ralph and I played together on the JDRHS varsity basketball and baseball teams. I remember him as a great guy and team player. My condolences to the family. Rest In Peace.

I'll miss you my good friend, we knew each other since 6th grade and you were my friend for all those years. I wish we could have just one more round of golf, but I know you have all the tee times booked up in heaven. I'll never forget you and my only regret is that I never got to say goodbye. So, goodbye old friend Rest in Peace.

Rest in peace, Ralph. The world is a better place because of you. Condolences and prayers for the family. Love you all.

Thank you, Mr. and Mrs. Losanno, for always welcoming me into your home and treating me like family. Mr. Losanno, I always enjoyed your humor and your stories, you will be missed. My deepest condolences to Mrs. Losanno, Ralph and Tony.

It seems that whatever I say will never be enough. My Cousin Ralph affectionately known as "Super Scong" was, along with our cousin Fred, one of my older Brothers. From the age of 6 to until Uncle moved I practically lived a Leland Ave. Where Ralph Tormented Supreme. Ralph you where the role model I did not have in a Father, and the older brother I always wanted. you Taught me your version of Life, to go after my future with a vengeance and let no one stop me. I will miss your...