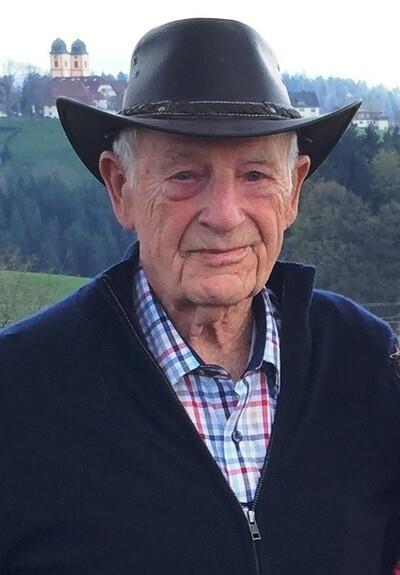 Fred Wayne Wiesen peacefully passed away on Independence Day, July 4, 2020. More than anything in this life, Fred loved Jesus and lived to share the gospel with everyone he met. He faithfully served his Lord and Savior his entire life, and the desire of his heart was that everyone he came into contact with would come to know Jesus as their Lord and Savior.

Fred was born in Pear Ridge, Texas on April 26, 1935. He grew up with his mother reading the Bible to him, instilling in Fred at a young age a love for God’s Word. Fred surrendered his life to the ministry on September 17, 1952 at the age of 17. After graduating from Jefferson High School in Port Arthur, Texas, Fred moved to Corpus Christi, Texas to attend the University of Corpus Christi, where he graduated with a Bachelor of Arts degree on May 23, 1957. While in Corpus Christi, Fred attended Morgan Avenue Baptist Church, and it was there that he met his first wife, Nancy Lee Morris Wiesen. They quickly fell in love and were married on September 8, 1956.

After graduating from the University of Corpus Christi, Fred and Nancy moved to Fort Worth, Texas, where Fred attended Southwestern Baptist Theological Seminary. Upon graduating from Southwestern Baptist Theological Seminary, Fred and Nancy moved to Peoria, Texas where Fred began his full time ministry as a youth minister. From Peoria, Texas, Fred and his family moved to Portland, Texas, where he served as the pastor of the First Baptist Church. From Portland, the Lord led Fred and his family to move to Del Rio, Texas in 1968, where he served as the pastor of the First Baptist Church in Del Rio, Texas. In 1972, Fred was called to lead Park Heights Baptist Church in San Angelo, Texas. After serving there faithfully for eight years, Fred was called to move to Houston, Texas to start what became North Oaks Baptist Church in Spring, Texas in 1980. Fred served North Oaks for 32 years, before retiring on February 26, 2012. Late in his ministry there, his first wife, Nancy Lee Morris Wiesen, passed away on May 27, 2010 after a long battle with cancer.

It was by God’s grace that Fred met the second love of his life, Carolyn Yost Wiesen, in 2011 as he was finishing his ministry at North Oaks Baptist Church. They married on October 29, 2011 and moved to Brownsboro, Texas following Fred’s retirement from North Oaks Baptist Church. During this time in retirement, Fred and Carolyn became devoted members of Green Acres Baptist Church in Tyler, Texas and served faithfully there until Fred’s passing. While living in Brownsboro, with the help of his wife Carolyn and friend Jim Walters, Fred wrote and published “Jesus in His Glory”, a book focused on a verse-by-verse exposition of the book of Revelation.

It was also in Fred’s “retirement” that he took up woodworking, which became a new passion for him. In this work, Fred and Carolyn continued to serve God through making beautiful custom pieces of furniture and other items, many of which he donated to various ministries, including the one ministry that held a special place in Fred’s heart for many years, Texas Baptist Men.

After faithfully serving his Lord and Savior Jesus Christ for many years, Fred was called to his eternal home on Independence Day, July 4, 2020. On a day that our nation celebrates its freedom, Fred now lives in true freedom in heaven, in the wonderful presence of his Lord and Savior.

A private, family graveside service will be held on July 10, 2020, during which Fred will be laid to rest next to his first wife, Nancy Lee Morris Wiesen, at Klein Memorial Park located in Pinehurst, Texas.

An online version of this obituary and an electronic guestbook can be found on the Klein Funeral Home website, kleinfh.com, where you may share your memories and thoughts of Fred with others.

I am so incredibly sad to learn that Mr. Wiesen passed away. He was a life long friend of my dad, Carlton Hazlewood. Reverend Wiesen married Jim and I on April 11, 1981. He will certainly be missed and I know my dad will miss him terribly. Love and prayers to all.

Heartfelt condolences to Wayne Jr. and all the family from a former colleague of Wayne Jr.

Pastor Fred was a dear brother in Christ and is now home. He will be missed but we will see him again.

We will miss our friend, teacher, and respected brother in Christ. But our loss is Heaven's gain.

Carolyn and Fred were such a blessing to Johnny and me in our Sunday school class at GABC. Thank you so much for always having encouraging words of wisdom to share with us. We loved and will certainly miss Fred.

We will be eternally grateful for Fred's keen insights and words of wisdom, and look forward to rejoicing with him in Heaven!

Prayers for the Wiesen family as you celebrate his life today. I will cherish my memories of Fred and the wonderful lessons he shared with us. He will be greatly missed.

Freds legacy lives on in all of us touched by his love for God, passion to teach the Word, and his life that reflected both!
Carye Gillen

Thinking and praying for the Wiesen family as yall celebrate Freds life today.

Never miss an update about Rev. Fred. Sign up today.