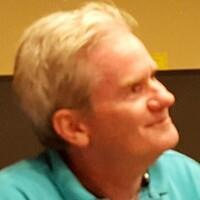 Richard T. Sheridan age 53, of Zephyrhills, passed away Saturday, September 5th, 2020 at Hospice House of Lakeland surrounded by his loving family after a year long, courageous battle with cancer.
He was born in Glens Falls, New York on November 21st 1966, to loving parents Martin and Elizabeth (Griffith) Sheridan.
Richard graduated from Tarpon Springs High School in 1985 and prior to that he spent part of his childhood growing up in Wales, Great Britain. He was always very proud of his Welsh heritage and that is where he first learned his soccer playing skills. After high school, Richard went on to serve 4 years in the United States Coast Guard, primarily stationed in Clearwater, Florida and later completed Marine Mechanics School. He later worked as a sales representative for a couple national companies including Nestlé, Acosta,  and Kraft and most recently was employed by Countywide in  Hillsborough County. He was an active member of Faith Baptist Church in Wesley Chapel for many years.
Richard had the uncanny ability to leave a positive and long lasting impression on everyone he met. He was truly one of the best, a kind hearted and gentle soul,  a loving family man, the best son, brother, father and friend anyone could ever hope for. Richard adored his family and friends and his children were his entire life. Richard was man of integrity, strong faith and fierce loyalty and worked hard to instill these values in his children. Richard has been blessed with a multitude of beautiful, kind, and caring people in his life which is truly a testament to who he is.
Richard (aka Rickey to his family and Rich to his friends) was so vibrant and full of life. He was an avid sports fan and loved his Denver Broncos, the Florida Gators and he loved watching and playing  soccer,  especially with his four children. Richard  enjoyed nature, fishing and the outdoors and was a true animal lover. He never turned away a stray or left a turtle in the road or kept the fish he caught,  it was always catch and release.  Richard loved to visit Fred Howard Park on weekends and kick the ball around with his children, then catch a sunset and have some Greek food in downtown Tarpon Springs after visiting with his family. To know Richard was to love Richard. He was truly a special man, and while he is gone too soon, we were blessed to have him the short time he was here. He will be deeply missed by so many.
Left to cherish his memory are his children, Gareth, Lexie, Kayleen, and Nicolas; his parents Martin and Elizabeth; and siblings David Sheridan, and Tami Sheridan-Orlando (Joseph).
There will be a memorial service on Friday, September 18th, 2020 at 6:00 pm at Faith Baptist Wesley Chapel 6300 Oakley Blvd Wesley Chapel, Fl.

In lieu of flowers, please consider a donation in Richard's memory to the American Cancer Society or to your local animal shelter.

Rich had the unfortunate pleasure of being seated next to me and Scot McAllister in 9th grade art class at Tarpon High school. We picked on him mercilessly over his Scottish accent. He never let us get to him. Finally, after giving him all the abuse we could - we gave up. He always had the "fire" from within and that winning, contagious smile. We was a wonderful addition to our class! After graduating in 1985...it would be decades before I would speak to him again. We reconnected...

Rich was one of the nicest guys i have ever know, i guess the saying is true the greats die young! Rest in peace buddy, i hope you and my dad are reunited in that huge soccer field in the sky!

God bless you all at this very sad time... my thoughts are with you

Rickey, I want to tell you how much I admired you, as a Dad and for your strength and courage. All the love and goodness of you lives on in those whose lives you shared. May you find peace in the eternal life. With deepest sympathy to Beti, Marty, David, Tami, and Joe, and to your children Gareth, Lexie, Kayleen and Nicolas.

To Beti, Marty, David and Tami. Also to Rickey's children, Gareth, Lexie, Kayleen and Nicholas. Sorry I can't be with you on this very sad day. My deepest sympathy to you all for your loss.
Oh Rickey, I am so sorry you didn't make it through your brave, long and painful struggle with your illness. May you now rest in peace.

Rickey, thousands of miles have separated us cousins for well over half our lives. I don’t think we ever met after you returned to the US and I do regret that. Our mothers have done a wonderful job of keeping everyone up to date and the obituary and tributes on here say much about you, your life, your family and your friends including some things I didn’t know. It is clear that you will be missed terribly.

Thinking of you Beti, Marty, David, Tami, Joe and the children at this...

I will forever remember Rickey and his smiley, freckly face - one of my younger cousins when they lived here in North Wales as children. We have only met once since then - sadly the miles that have separated our families have been too great. Rickey has been, and always will be, remembered with love and affection.
Thinking of you Beti, Marty, David, Tami, Joe and the children at this sad time.
Cariad mawr oddiwrth Gwyneth, Ioseff, Angharad ac Eleri. x

Richard, Margie and I miss you so much. The conversations we had are priceless. We thank you for allowing us to be a part of your family. Friends like you only come along once in a lifetime. There will always be a special place in our hearts that only you can fill. You are indeed a class act. Take care friend; you have fought a good fight, you have finished your course, you have kept the faith. Well done.

Ricky
You were a great brother in law and even better person. You brought happiness everywhere and to Everyone you encountered. Our time together was much to short. I tell people that never met you that you were the nicest of the nice guys. Love you buddy. R.i.P until we meet again.