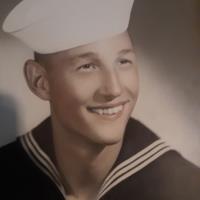 Graveside services will be Monday, December 6, 2021, at 11:30 A.M. at Mt. Vernon Cemetery in Atchison, Kansas. A visitation with the family will be Monday, December 6th from 10:30 A.M. until the time of service at the funeral home. Memorial contributions are suggested to Shriners Hospital or Mt. Vernon Cemetery and may be left in care of the Arensberg-Pruett Funeral Home with whom funeral care has been entrusted.

Robert was born November 1, 1933, in Leavenworth, Kansas, the son of Carl and Marian (Everett) Kempin. He attended Trinity Lutheran School.

Robert enlisted in the United States Navy on November 6, 1950, serving until his honorable discharge on August 19, 1954. During his time in the Navy he served on the USS Helena earning the National Defense Medal, the Korean Service Medal, and the United Nations Service Medal.

He was employed with Page Airways for 27 years. Following this he worked an additional 10 years as a packer at Blish Mize Company.

He was preceded in death by his parents and a sister, Helen Kempin.

So sorry for your loss. Will keep you and your family in our prayers

I am very sorry for your loss. Our prayers are with you all.
Derek and Teresa Gillmore

Dad thanks for Accepting me and all the chats we had together. Keep an eye on shorty for me. She and I love you. Bye dad Randy and Kathy.