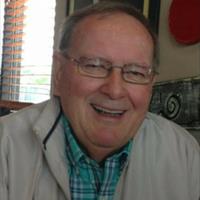 He was born 5/17/1940 in Canandaigua, New York. At the age of 14, he moved to Seneca Falls, New York, and graduated in 1958 from Mynderse Academy. He was a proud US Navy Veteran who served 1959-1963 for his country.  He graduated from Northern Michigan University in 1971. He raised his family with a loving wife and four children, moving numerous times in different states providing him with a wonderful lifetime full of stories to share.

Bob retired from Sylvania GTE, also re-retired from the Hot Springs, Arkansas YMCA at the age of 80.

He was raised a Master Mason at Pocahontas Lodge #211 in Seneca Falls, New York, served several lodges throughout his travels and received his 50-year certificate from Dallas Lodge #760 in Dallas, Texas. He was a member of the VFW and Elk’s.

He is survived by his wife of 55 years, Sandra Trickler (Meeks) Miller. Four Children: Melvin (Victoria) Miller of Springfield, Arkansas, Paul Miller of Lake Dallas, Texas, Jeffrey (Elizabeth) Miller of Rowlett, Texas and Shelley Miller of Denton, Texas. Brothers Thomas Miller of Arkansas, Charles (Anita) Pendell of Florida. He left behind many nieces and nephews, friends and beloved cat Tobey. He is preceded in death by his parents Bob and Marie Miller of Seneca Falls, brothers Richard Miller and Todd Miller.

A memorial will be held in Hot Springs, Arkansas at the YMCA on May 15th. Place of interment will be at Roselawn Memorial Park on June 5, 2021 at 11:00 a.m. with military honors.  There will also be a Memorial Service held in Dallas, Texas that will also be announced at a later date.

May your family find peace. I am so sorry for your loss.

Bob was one of the nicest people I've ever met. I knew him from the Y in Hot Springs AR. Always smiling. Always asking how my husband was doing.