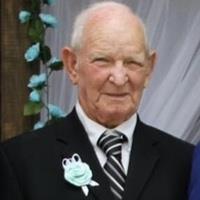 PLEASE NOTE: THE SERVICE AS BEEN POSTPONE UNTIL A LATER DATE, PER THE FAMILY.

Robert Irvin Pinkerton left this earthly home for the grandeur of Heaven on October 2, 2020.  Mr. Pinkerton was born and grew up in the Pine Springs Community and spent many years working  in the rose fields with his family.  He worked for the Richardson Company for many years and ultimately worked for Bonar Packaging until his retirement in 1999.

Robert loved the outdoors, hunting, fishing, gardening, and watching and studying wildlife. His life can be described as trustworthy, faithful, a true and dependable friend, and he held a great love for his family.  He is a member of FUMC Chandler.

A memorial service (HAS BEEN POSTPONED)at First United Methodist Church, Chandler, Texas with Pastor Bryan Harkness officiating, under the direction of Jackson's Burks Walker Tippit Funeral Home. Visitation HAS BEEN POSTPONED. Social distancing will be observed.

Always enjoyed visiting with Mr Robert and Betty, will miss seeing him in the neighborhood. Prayers and comfort and much love to Mrs Betty and all the family.

I, like my sister, have such great memories from growing up around Robert and Pat. They took an interest in our lives and showed their love by taking us places with them or letting us spend the night. I tell stories about them to Greg and to my grandkids. I can't ever forget Robert's constant teasing me. I'm so sorry for your loss Sherry, Bobby, Ginger, and Betty and extended family. I love all of you and will be praying for the family. It's not an easy thing to lose your Daddy, so...

He was a great Uncle to all of us growing up. I have such wonderful memories of him and Pat. God Bless you: Sherry, Ginger, Bobby and the rest of the family. I love and miss you all.

Sending Love and Comfort during this difficult time. My deepest sympathies for your loss.

May the love of friends and family carry you through your grief. Craig and Cathy

Sherry and family, The 1977 Class of Chapel Hill High School extend our most sincere condolences to you during your time of bereavement and beyond. May God comfort your hearts for the days ahead.