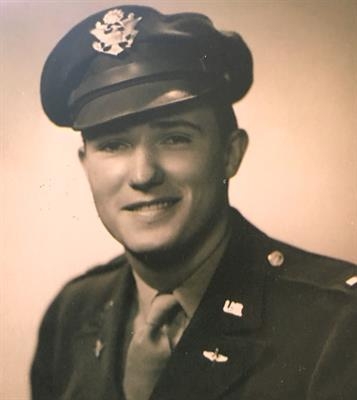 Not the right person? See All ›
DIED
April 19, 2018
LOCATION
Matthews, North Carolina
CHARITY
The Charity of your Choice
Make a donation

Robert E. Ryan, 93, Charlotte, left this life on April 19, 2018. Husband of the late Rita Catherine (Aschenbrenner) he was born September 27, 1924 to the late Benjamin E. and Mary Donna Ryan. Growing up in Chicago he was a child of the 1930's Great Depression. Unlike many, his family was never on relief - his Dad worked for the Post Office for 47 years. But wearing used clothes, worn shoes and being hungry were all part of that tough time.

Robert had a different life in the summers he spent with his Aunt Mary Leonard in Harmon, a very small western Illinois town with gravel roads, no utilities, one general store/post office. Her home was lighted by kerosene lamps, heated by a pot-bellied stove and with no plumbing water came from a hand pump outside the back door. An earthen cellar stored foods she preserved for winter - most of it from her very large garden. Outside the town was a family farm, a land grant to her grandfather earned for helping build the first railroads west.

During WWII, Robert entered the military at 18 in 1943. Following intensive training as an Aviation Cadet he earned a commission as a Navigator/Gunnery Officer - a proud member of the Army Air Corps. He served until 1946 on both B17 and B 29 combat crews.

The GI Bill opened his door to college - to Northwestern University's Medill School of Journalism where he earned a degree (first in his family) in 1948.

Rita and Robert married November 27 (Thanksgiving Day) 1947. They first met in eighth grade in 1938 - but the many letters exchanged during WWII were key to knowing and in time loving each other. They spent the first 35 years of their married life in Illinois - 25 in Deerfield where they raised their two sons and five daughters. Both felt proud and blest that all earned college degrees - even more that they grew into good Christian adults.

Theirs was a truly joyful marriage - even during the last 8 years of Rita's life when she suffered from ALZ. She left this life days after her 90th birthday; they had celebrated 67 years of marriage.

Starting civilian work as a writer/editor, Robert later held marketing management positions for several large US corporations before joining Gist-Brocades of Delft, the Netherlands in 1977. The large chemical firm moved its headquarters to Charlotte in 1982 where he continued to serve as an officer and director until his retirement in 1988.

Following the move to Charlotte, Robert and Rita became founding members of the new St. Matthew Catholic parish in 1986. Active from day one they were honored to be appointed the first Eucharistic Ministers of the new parish.

A Mass of Christian burial will be celebrated in the chapel of St. Matthew Catholic church at 11:00 AM on Tuesday, April 24th. The family will receive friends in the chapel at 10:00 AM. Inurnment in St. Matthew's columbarium will be at a later date.

In lieu of flowers, donations in Robert's name may be made to Hospice and Palliative Care, 1420 East Seventh Street, Charlotte, NC 28204. hpccr.org, or a charity of your choice.

I think of your Dad everyday as hes in my prayer I say for all the departed souls. I will say a special prayer for him on his anniversary. I miss seeing him at mass every Thursday morning and the books he gave me. I read my copy every day. May God Bless all of you and feel your Dads presence close by. Blessings,
Donna Lynch

Please accept my dearest and heartfelt sympathy; I am so sorry for your loss. May the God who "binds up the brokenhearted" and "comforts all who mourn" sustain your family during this challenging time. Isaiah 61:1, 2

He was alaways a devoted family man. I wish the entire Ryan family peace. God Bless you all.

I have such happy memories of time spent at your house when I was little. He had an infectious smile and your Mom had such an infectious laugh. So thankful for the memories. So sorry that I could not attend yesterday but you are all in our thoughts and prayers. Love, Cathy Filippini (Ridgeway)

Liz, your dad was obviously a wonderful fellow, and I know you'll miss him greatly. Please know that you're in my heart and in my prayers.

Dan and family, I am sorry about the loss of your Father. In reading about him, it is clear how special a man he was. My thoughts and prayers are with you.

I thought very highly of your father. He was a ray of sunshine in all he did. He will be missed very much. Prayers and thoughts to all

Liz, your father's obituary offers a great testimony for a life well spent.
God speed to you and family.