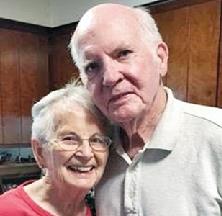 TOGETHER AGAIN Robert D. Ryan, 92, surrounded by his family, went home to be with the Lord and his beloved Esther on February 12, 2020. He was preceded in death by his wife of 68 years Esther; parents, William and Helen Ryan; brother, William and brothers-in-law, Robert Stadvec and William Musselman. Bob was born in Akron and graduated from Buchtel High School. Enlisting in the Navy during WWII, he served on LCS 91 and was honorably discharged August 1946. After the Navy, Bob was co-owner of Barberton TV and Appliance Center serving customers for 28 years. Not unlike his wife Esther, Bob had a tremendous passion for the needs of others and expressed that by supporting many organizations and individuals in the Barberton area. With all that goes along with running a small business, he still found time to be the best husband, father, son, grandfather (Papa), uncle, great-grandfather, friend and servant of the Lord. He loved to golf (earned 2 holes in one), fish, play euchre and help others whenever he could. Robert will be deeply missed by his children, Craig, Rick (Pat), and Susan (Barry) Gregory; 5 grandchildren, 6 great grandchildren, sisters, Gloria Stadvec and Deedee Musselman, sister-in-laws Ruth Darling and Alberta Edgerly, many nephews and nieces. Private family services will be held at the family's convenience with interment at the Ohio Western Reserve National Cemetery. In lieu of flowers, the family knows Bob would be honored if you would make a gift to the Esther Ryan Shoe Fund, c/o Magic City Kiwanis, P.O. Box 561, Barberton, OH 44203.

What a lovely picture! Very sorry for the loss of Bob. What wonderful memories growing up with your family and the love and kindness they shared in our lives. He and Esther are peacefully together now....

Ryan Family, Please accept my sincerest sympathies and know my prayers are with you on the passing of your Father. A lovely photo of both your parents, Although I was more associated with Esther, She will always be in my heart. May the wonderful memories and blessing during your parents lifetimes comfort you in all your times of need.

To the Ryan family, So sorry to hear about Bob's passing. My wife Karen and I both worked with Esther in the school system for a number of years. I also had the pleasure to play golf with Bob at BBCC and to share coffee and conversation as well. I'm glad I had the opportunity to know both Bob and Esther. Don and Karen Muffley. Cary, NC.

Sorry to hear of Bob's passing. He fought the good fight. Now Esther can get him back in line up there in Heaven! Maybe he can even ride a GREEN John Deere tractor up there!!

Our deepest sympathies and condolences to all of you. May he rest in peace.