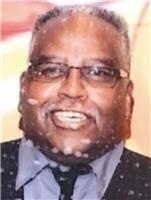 Not the right person? See All ›
LOCATION
Little Rock, Louisiana

Ronald Lee Ward, a resident of Little Rock, Arkansas and native of New Orleans, Louisiana, peacefully entered into eternal rest at his home surrounded by his wife and children on Saturday, October 31, 2020 at the age of 73. The son of the late Willie Ward and Bernadette Ross Ward of New Orleans, Louisiana; beloved husband of Sheila Dunn Ward; father of Ronald Ward (Chanel), Lolita Welch (Mark), and stepfather of Brian Mitchell (Camille), Angela Johnson, and Unel Mitchell III; Grandfather of Arlander Taylor III, Joshua Taylor, Mason Mitchell and Chloe Mitchell; brother of Jeanette Clark, Diane Adams, Raseen Ward, Terrell Ward and the late Tyrone and Melvin Ward; also survived by a host of nieces, nephews, cousins, other relatives and friends. Ronald attended G.W. Carver High School and Delgado Community College in New Orleans, La. Shortly after completing his studies, Ronald began his career in the hospitality industry in New Orleans working at the Royal Sonesta Hotel, Court of Two Sisters Hotel, The Delta Queen Steamboat. He retired in Little Rock, Arkansas from the Peabody Hotel, Food and Beverage Department, where he worked for several years. Missing the comradery of the hospitality community, he came out of retirement and worked at the Embassy Suites Hotel until his passing. Relatives and friends of the family are invited to attend the memorial service at Smith Funeral Home, 8801 Knoedl Ct., Little Rock, Arkansas, 72205 on Saturday, November 7, 2020 at 9 am. Arrangements by Smith Funeral Home, 8801 Knoedl Ct., Little Rock, Arkansas, 72205, (501) 224-2200. Please visit www.smithfamilycares.com to sign the guestbook.

Condolences to the family.