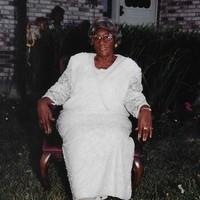 After 100 years of life, Rosa Mae Curry was called home by the Lord on Sunday, March 22, 2020. Her spirit has gone on to meet her Lord and Savior Jesus Christ in a home that is peaceful and created by God’s hands.
Rosa Mae was born to Weaver and Annie Mae Samuels in Washington, Ga on July 6, 1919. She was a student of the public school system in Washington, GA.  At an early age she became a member of Gibson Grove Baptist Church, where she was baptized and gave herself to the Lord. Rosa Mae later married and was blessed with five children. Ozia Cain, George Tutt (deceased), Marion Starks (deceased), Melba Starks (deceased) and Emmanuel Starks (deceased).
In 1953, Rosa Mae moved to Philadelphia where she was a member of Corinthians Baptist Church and she sung on their senior choir. She worked as a sewing machine operator for Lawrence Clothing, and retired in 1982.

In her retirement she moved back to her home of Washington, Ga in 1989, she stayed in her hometown for 17 years and during that time she reacquainted with her childhood friend Joseph Curry (deceased) and they married in 2002.

Later in life, Rosa Mae was diagnosed with Alzheimer’s and moved back to Philadelphia, where she lived and was care for by her daughter Ozia.

Rosa Mae was a devoted mother, sister, aunt, grandmother, great grandmother and great great grandmother. She had a personality and love for others that will forever live on in the hearts of people that know and love her dearly.
She enjoyed being around family, singing her favorite gospel hymns and spending holidays with her family.

Never miss an update about Rosa. Sign up today.