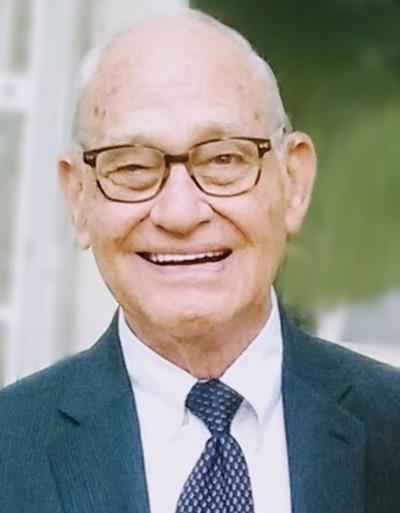 Roy Louis Comstock, age 92, died on Sunday, October 25, 2020. He was born May 17, 1928, in Oklahoma City, the youngest of four children. His mother, Lilly Belle Dye Comstock, was a nurse and his father, Walter Starr Comstock, a clerk.

Roy loved basketball as a kid, and played trombone in the Army marching band. He was introduced to Marie by his older brother, Jim, who was married to Marie’s older sister, Lois. After going to college together at St. Paul Bible College, and marrying in 1950, they started their family while Roy finished his undergraduate degree at Taylor University. After serving as pastor in Oconomowoc, Wisconsin, he moved the four children to Wheaton where he completed a Master’s Degree in New Testament. His thesis was on the Pauline concept of the pastor/teacher. He had to defer his plans to become a Bible professor, however, when he and Marie decided against moving the four children out of Wheaton. It was a sacrificial decision on his part, made for the benefit of Gordie, Gary, Dawn, and Doug. He bought a ServiceMaster franchise and provided home environment services in DuPage County for 25 years. He pastored the Congregational Church in Lee Center, Illinois and retired from ServiceMaster in 1995. In 2008, he and Marie moved out of the family home at 714 E. Illinois St. into the Windsor Park retirement community. After Marie died in March, 2020, he spent his last four months resting peacefully in Gordon and Karen’s St. Charles home. His greatest joys were his family and Christian faith.

A beloved husband, pastor, father, grandfather, great-grandfather and entrepreneur, Rev. Comstock had close ties to Wheaton College. A book written about him, Roy (Lulu 2019), portrays his generosity, tolerant attitude, sense of humor and wit. He loved planning family trips, poring over maps with the kids while adding up the miles between Wheaton and the Pippert family farm in Iowa. He and Marie were celebrated by the Comstock and Pippert extended families. They were particular favorites of “the cousins:” Bart, Larry, Jay, Dale, Brooke, and Paige (all double cousins); Richard, Greg, and Janet; Paulette; Annette, Heather, Jason, and Jenny; Elizabeth and David; Jeannie and Nancy. The cousins, in turn, brought Roy and Marie great pride and joy.

Roy was self-effacing, humble and insatiably curious. When one of the grandkids would grow tired of sitting patiently in a restaurant while the adults talked, Roy would quietly take them by the hand and walk them to the local park so parents could continue visiting. No one would know where he’d gone, and when he returned it would not occur to him to try to take credit for the selfless act. His calm, assuring demeanor did not diminish his sense for adventure. When Christians were burning rock’n roll records, he surprised Dawn with a copy of Meet the Beatles. When the tradition prohibited movie-going, he took the family to Wheaton Theater to see Oklahoma! He was a man of faith, even of the cloth, but his was not a closed mind.

He was preceded in death by his parents; his siblings, Jim, Walter, Jr., known as Mickey, and sister, Pearl; a daughter-in-law, Emily Goyer Comstock, Doug’s first wife; and an infant grandson, Sam Richard Comstock, born to Gary and Karen.

A memorial service will be planned when Covid travel restrictions have eased. Donations may be sent to the Roy and Marie Comstock Scholarship in Bible at Wheaton College Advancement, 501 College Avenue, Wheaton, IL 60187, or by calling 800 525 9906.

We're very thankful to have known both Roy and Marie.

Roy and Marie led a Bible study in their home at Windsor Park for many years. When Bryan visited Roy, Roy would give a report on each member of the family and how he was praying for each one. Roy's faith has now become sight. Our sincere sympathy to the family.

My Dad was a remarkable man. To read more about him, look for the book, "Roy," here: https://sites.google.com/ncsu.edu/garylcomstock/home/contact-me/personal

Roy was such a nice man and will greatly be missed. Praise God Roy is home with his wife

Never miss an update about Roy. Sign up today.