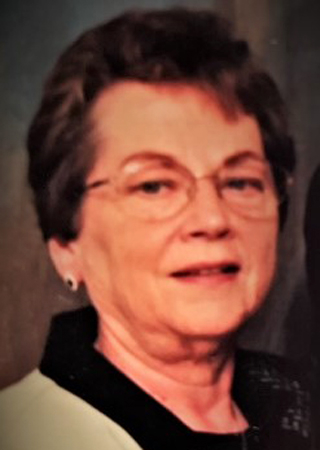 FAIRBURY - Ruth Darlene (Cooper) Doran went to be with her Lord and Savior at 1:01 p.m., Friday, February 5th, 2021 at Carle BroMenn Regional Medical Center, Normal. We know Ted was waiting for her at the gates of Heaven.

There will be a private family service on Tuesday, February 9th, 2021 at Duffy-Pils Memorial Home, Fairbury. Burial will follow in Gridley Cemetery, Gridley. Memorial contributions may be directed to the First United Methodist Church, Fairbury.

Ruth was born February 13, 1935 in Gridley. She was the daughter of Elza "Elsie" and Lorraine (Dodson) Cooper. She met the love of her life, Theodore Thomas Doran, in high school and they were married October 18, 1953. He preceded her in death on March 20, 2017.

She was preceded in death by her loving husband of 63 years, Ted; her parents, one brother James 'Jim' Cooper, four sister-in-law's, and three brother-in-law's.

After high school and getting married, Ruth raised her children, worked in the school cafeteria, and at the old Bluestem National Bank in Fairbury. With Ted, she owned and operated Fairbury's favorite drive-in, RD's, for 17 years. She was a member of the United Methodist Church in Fairbury, where she participated in the church choir and several church groups. Ruth was a wonderful hand quilter and made every one of her children and grandchildren their own blanket. Her favorite sports teams were the Illini and the Chicago Cubs. She was able to see them win the World Series, sitting side by side, with her husband. Above all, Ruth loved her family, enjoyed making meals, chatting on the phone, or more recently- seeing them out her window at Evergreen Village, Normal.

Our family would like to extend all our gratitude and appreciation to Carle Bromenn Regional Medical Center and Evergreen Village for their amazing love and care.

This obituary may be viewed and condolences sent to the family at www.duffypilsmemorialhome.com.

Never miss an update about Ruth. Sign up today.