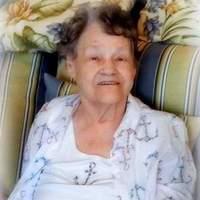 Ruth was born on September 16, 1929, in Forbs, ND, the daughter of Fred and Lydia (Beopple) Roehl. She was united in marriage to Warren Jeffery March on November 17, 1947 in Liberal, KS. Ruth was a member of the Seventh-day Adventist Church of Macon where she was an assistant to the Children’s Division Leader. She enjoyed sewing, flowers, cooking, and babysitting her grandchildren and great-grandchildren.

She was preceded in death by her parents; her husband, Warren, in 1988; two sons, J. Allen March, and Gerald “Jerry” March; six brothers, and eight sisters.

Celebration of Life will be held 2:00 pm, Sunday, December 8, 2019 at the Seventh-day Adventist Church in Macon, MO, followed by a time of fellowship with the family. The family suggests memorials to the Randy Johnson Memorial Fund. Arrangements are under the direction of Hutton & McElwain Funeral Home in Macon, MO.

Winnie, Keith, Gale and family. We are SO very sorry to hear about the loss of your mom. She was such a wonderful lady - a treasured sister of our mother, and such a special aunt. Our hearts are with you and we send our love and prayers. Looking forward to the grand reunion when the Lord returns! It can't be long.....

Keith and family, Sorry to hear about your mother. Thoughts and prayers.

Ruth was such a wonderful inspiration to me as a young girl growing up in Missouri. She was beautiful in every way. I

May your sorrows and grief be eased God's Love and those wonderful memories overtake the loss your heart is feeling today.
Prayers for family

Will meet her under Tree of Life, in Heaven. Dear friend

Never miss an update about Ruth. Sign up today.