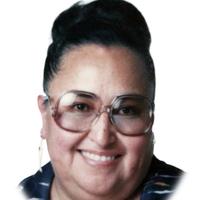 Salome was born Dec. 20, 1933 to Edmundo and Antonia Velazquez, she was raised in Torreon, Coahuila, Mexico. She attended Polytechnic High School in Los Angeles and graduated with honors 1950. Salome was a loyal employee for many years at Olvera Street and Sears & Roebuck at the Boyle Street Store in Los Angeles. She was a sales person in various departments. Known to all her friends as Sally. She retired at age 60.

Salome married Bernard Salazar January 8, 1953 when his tour of duty was over from the Korean War. They were active members within the Church until our fathers’ passing, which our mother continued until her health issues prevented her from being as active as she liked, but she still attended church weekly just until March. Their various church activities were the Cursillo, Movimiento de Maria, and Marriage Encounter they had many friends due to these groups, which included Deacons, Priests and Sisters. She was a devote Catholic and had an unwavering faith in God, she prayed the Rosary until her last breath on earth.

Beloved wife, mother, mother-in law, grandmother and great grandmother, she passed away at the age of 86. Salome was preceded in death by her husband of over 40 years, and son’s Edward, and Bernard Jr. She is survived by her oldest daughter Antonia, (husband: Ruben Macias), and her youngest daughter Guadalupe, (husband: Victor Fousel), followed by grandchildren: Elizabeth, Teresa, Benjamin, Nicolette, Miles, Carol (CJ), Sydney, Kyle, and 9 Great Grandchildren. Salome was the oldest of 10 children and will be missed dearly. Salome passed less than 30 days of her sibling Edmundo Refugio Velazquez. Her surviving siblings are: Carmen Strada, Martha Lujan, Manuel Velazquez, Antonia Murillo, Francisca Velazquez, Adela Martinez, Maria de Jesus Robles and Maria Luisa Velazquez. Salome loved her family and life, everyone remembers her huge smile and laugh.

Due to this time of pandemic no public services, and or large gatherings can be scheduled at this time. The family will have a private burial at Resurrection Cemetery. At a later date a Mass and celebration of her life will be scheduled. The family would like to extend a warm thank you and appreciation for all of the condolences and well wishes received since Salome’s’ passing.

God bless you all,
Sincerely the Salazar family

To the Salazar family, I am so very sorry for your loss and the heartache of her passing. She was such a friendly person.

Never miss an update about Salome. Sign up today.