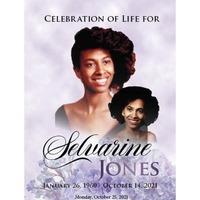 She was preceded in death by both parents and youngest brother, Jay McClanahan.

Selvarine has worked in the Springfield community for many years, serving on Multiple boards, such as the Springfield Area Arts Council, IL Senior Olympic Games, Mommy’s Safe Haven and Community Arts Center(in which she was also a co-owner and operator with her twin sister).As an avid volunteer, she faithfully served with the Family Service Center’s Compass for Kids after-school meal and tutoring program, and was a certified volunteer for the Salvation Army, as well as, Grant Writer for Pure Haven Family Resource Center. From 1987-1995, Selvar hosted and produced a local talk show on Access 4 channel. She co-directed and participated in four (4) of the State of IL CMS test videos. In 1988 to present, she began partnering with various theatres, sororities, and churches-writing, directing and performing in plays-in which she has received numerous Appreciation & Service awards from sororities and other organizations.

She was an active member of St. John AME Church for more than 20 years where she served in many capacities, including church secretary, missionary society, choir, and Sunday school department.

In loving memory of a wonderful person. We will love you and miss you always. My childhood friend...

My Condolences to the family of Ms. Selvarine she was monumental in helping my love for dance develop. Thank you for the part you played. You made praise dancing fun at St. John's AME. You will be missed. I pray for your transition.

Deeply felt condolences to the family at large. Selvarine was indeed a beacon of light and love in our community. Having worked with Selvarine at Springfield Urban league & spent time with her during our Journey Conferences, gave me the opportunity to know her and see her kind and generous heart. She was always ready to help and give of her multiple talents to bless others. I know she must be dancing in heaven.
May God's peace be upon the family and may you soon draw from the well...

Elmada and Odett,
My thoughts and prayers are with you during this very difficult time.

My deepest condolences to her children, grandchildren, siblings, family and friends, I Know this is not easy. Fly high Selvarine

Condolences to Elmada and the rest of the family. I am soooo sorry for your loss.

Dearest Elmada and family,
God Blessed your family with a precious Gift, your beautiful sister, mother, grandmother, best friend, a true Soldier for Christ, Selvarine.
We pray for all of you everyday and will continue doing so as long as we have breath. We Love you with the Love of The Lord. Be at Peace. "God is awake!" Brother and Sister in law Van and Cheryl Hardison and family

To be absent from the body is to be present with the Lord. Family we are praying for you all in your hour of sorrow. Selvarine will be missed. Look to the hills from whence cometh your help and know that all your help comes from the Lord. God bless you all.

Never miss an update about Selvarine. Sign up today.