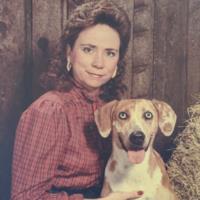 Not the right person? See All ›
LOCATION
Kingsland, Texas

Shirley and the family moved from El Paso to San Antonio when she was very young. After high School, Shirley moved to south Texas and worked as a bar tender with her lifelong friend DeLayne Baker. Later, she married Jim Hill and the couple was blessed with a daughter. The family lived in Bertram, Texas for many years until settling in Kingsland, Texas in 2018. Shirley was a cowgirl through and through. She was big into the rodeo and was an accomplished team roper. She even married Jim Hill on horseback, the groomsmen and bridesmaids were all horseback as well. Shirley was a very good cook and leaves many handwritten recipes for her family to cherish and remember her by, especially her famous goulash. She enjoyed country and western and swing dancing, and always felt at home when she was horseback. She cherished the time spent with her family, but it was her grandchildren that held a special place in her heart.

Shirley is preceded in death by her parents, Elmer and Wavolette Ramsey.

The family will have a private memorial service at a later date.

An online guest register may be signed at www. PutnamCares.com

Shirley, I am simply shocked that I was speaking to you just the night before the good lord decided to call you home. To say that I was floored to hear about your passing the following day is an understatement and a true testament to the fact that we all can lose our friends and family within a blink of an eye at any given time; therefore, you leave us with the everlasting reminder to reach out to all of our loved ones and let them know just how much they mean to one and all as we move...