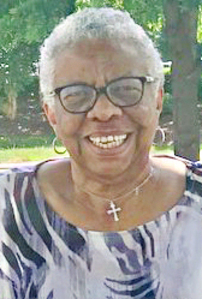 Mrs. Shirley Jo Russell Lewis was the first of four children born to the late John Harrison Russell, Sr. and Margaret Ellen Reid Russell Sherrill on June 30, 1942 in Cabarrus County, NC. "Jo," as she was affectionately known, went home to be with the Lord on Sunday, October 11, 2020.

Shirley grew up in Landis, NC and was a 1959 graduate of Aggrey Memorial High School. She continued her education at Barber Scotia College, Concord, NC, transferring to and graduating from Livingstone College, Salisbury, NC. She furthered her studies at Salisbury Rowan Community College and Forsyth Technical Institute. Shirley began employment with Salisbury Rowan Community Service Council as a Headstart Teacher. Further employment included Kayser-Roth Hosiery in Concord, Creedmoor, and Kernersville, NC where she retired as Human Resources Manager. She was also employed by Goodwill Industries, Aramark Sports and Entertainment, and Goler Memorial AME Zion Church.

Shirley was a devoted member of Sandy Ridge AME Zion Church, Landis. After relocating to Winston-Salem, she transferred her membership to Goler Memorial AME Zion Church. At Goler, she served as a Deaconess and was an active member of the Parent Body Missionary Society. She also served as the Secretary of the Winston-Salem District WHOMS.

Shirley loved working in her flower gardens and cooking. She shared meals with her neighbors and friends until her illness prevented her from doing so. Shirley was an avid sports enthusiast. She spent many years following her son Michael's football career from age 5 through his successful college career at Wake Forest University. She was a lover of all sports throughout her lifetime. Her family will never forget the emotions she displayed and her knowledge of the games.

Arrangements: Public Viewing will be Friday, October 16, 2020 from 5-8pm at the funeral home. Funeral Services are private.

Noble and Kelsey Funeral Home, Inc. is serving the Lewis Family. Online condolences may be sent to nobleandkelsey.com.

Shirley it has been my honor to serve you for the last 30 years. The last thing you said to me when I finished your hair at the hospital you said I'm ready. I will always remember the smile and glow that was all about you. I know you are in the arms of God.

Sympathy is extended to Shirley Jo's family. May the Lord comfort, bless, and keep all of you.

To my dear cousins, I can not be with you in body but I am with you in spirit and love. We very saddened to hear that Shirley had made her journey home to be with the Lord and we now have comfort in knowing that she is resting in the arms of our Jesus. I will miss talking to her from time to time especially about my grandson's college football games and his blogs to which she loved following.
Yea though I walk through the valley of the shadow of death, I will fear no evil for thou art...

May God be with you and your family. My condolences . R.I.P. Mrs Jo! ❤

Mrs Lewis will be well missed. Rest in peace now. There is no more pain and sorrow

To Marci, Ri, Johnny, Judy, Jenny and all that were near and Dear to Shirley Jo. "Let not your hearts be troubled" for our dear cousin is at rest with peace like no other. She has ran Her race and earned Her starry crown. No doubt there's a REAL Reunion going on in heaven. The memories will live forever. CHERISH them all and most importantly one another. Miss you much! Love you more!! Be safe and stay well.