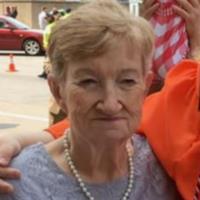 Sue Coffman, 76, widow of Lonnie Carl Coffman, died Saturday, August 8, 2020 at Ephraim McDowell James B. Haggin Memorial Hospital.  Born June 29, 1944 in Lawrenceburg, she was the daughter of the late Virgil Lee “Todd” and Viola Sallee Robinson.  She was a caregiver and homemaker.  Sue was also a member of the Dry Branch Baptist Church and she enjoyed listening to music and spending time with her children, grandchildren, and family.

She was preceded in death by two brothers: Jesse McGinnis and James McGinnis, and one sister Betty Taylor Yocum.

Visitation will be held from 11:00 a.m. until the hour of service at 1:00 p.m. Wednesday at Alexander & Royalty Funeral Home.

To share your memories or to send a message to the family, please visit alexanderandroyalty.com.

I used to come and play my flute for Sue at Harrodsburg Health & Rehabilitation. She always made me smile when she "clapped" for me. I'm so sorry for your loss.

Mom was a hard worker and taught her children early on in life how to be responsible. I honestly don't know how she managed to work and raise 10 children, but she did and she made it look normal. She loved her family and always protected us where she could, even though sometimes we didn't deserve it. I have many fond memories of she and I in one on one conversations as a child. She certainly is special and her memory lives on through her family. I am so thankful that she no longer has to...

Never miss an update about Sue. Sign up today.