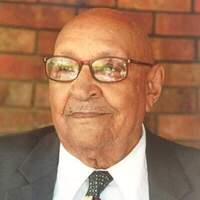 Tazewell Wade “T.W.” Saunders aka “The Dancing Deacon”,104, passed away peacefully at Charleston Memorial Hospice November 26, 2021 after a short illness, a little less than a month from his 105th birthday.

T.W. was born in Eagle, West Virginia on December 22, 1916 to the late Dupee and Viola Wade Saunders. Being one of 10 children he spent his younger years dedicating his life to Christ and playing basketball, which would remind you that those Saunders boys were tough on the basketball court. In 1935 he graduated from Simmons High School, Montgomery Wv , and would later join the military serving during World War II in France “Chasing Hitler” as he would say. He spent his adult years working at Union Carbide, Alloy detachment where he was remembered as being a hard worker and dedicated employee until his retirement in the 1980s. During retirement he spent his days mowing his grass until his health prevented him at the age of 100. He was also tinkerer  fixing old bikes and wagons for his grandchildren to enjoy when they would visit . T.W.was also a proud member and Deacon for First Missionary Baptist Church of London, making sure the church was open on Sunday’s and providing entertainment as “The dancing Deacon” during services. In 2016 he was recognized as being one of the oldest living deacons in WV and maintained that title until his death.

T.W. has one surviving sister, Laurita Bloxson of Detroit, Michigan. He is preceded in death by his siblings, James, Ira, Chauncelor, Carrington, and Louis Saunders ,Margaret Talley, Myrtle Thomas, and Dorothy Saunders.  He is also preceded in death by his wife of 76 years Evelyn Demae Jackson Saunders and his only son Jules Richard Saunders as well as his son-in-law Willie Dennis Rhem. He is survived by his daughters Frances Louise McRae of Dekalb, Georgia and Gloria Jean Rhem of London, West Virginia who was his caregiver until his death.  He is also survived by five grandchildren, Michael McRae, Brian McRae and Chandra Smith all of Atlanta, Georgia, Robert Saunders of Tampa, Florida and Alexandria Fisher of Charleston, West Virginia, a host of great grand and great-great grandchildren, nieces and nephews.

Due to the COVID-19 pandemic family requests face coverings and social distancing at the church and cemetery.

Condolences may be sent to the family via website www.cookefuneralhome.com

My deepest condolences and prayers to the family in their loss of a gentle soul. May God provide comfort and strength during this difficult time.

To The Saunders family. Thank you for sharing Deacon Saunders with us. Over the years him and I had a great bond. He called me " My Boy Tommy "
I will miss him. But the memories are rich. God bless Each of you.
Bishop Thomas Murray Jr. Lady Arnise Joy Murray and Fellowship of Love F.B.C. of Montgomery family.

Never miss an update about Tazewell. Sign up today.