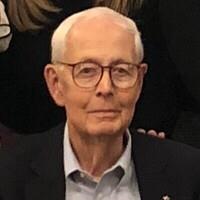 King III grew up on a farm in Roanoke before his family moved to the Denton area and he attended Denton High School, where he met his future wife, Nancy. He attended North Texas State College, now the University of North Texas, but never finished a degree — though that didn’t stop him from becoming a business partner in local insurance agency Ramey & White in 1962.

The firm changed its name two years later to Ramey & King Insurance, its current name, and King himself was involved in the business until he retired in the early ‘90s. Years before his retirement, he brought his twin sons James and Jeff into the business, which is now owned entirely by the King family.

In addition to his business success, King was an active community member, serving as a Denton city council member in 1974 and mayor pro tem in 1975. He was also active in several local organizations, including the Denton Chamber of Commerce, Kiwanis and two churches.

King’s sons remember him as a man set on always being outgoing and inclusive — and who simply loved to talk.

“He’s probably the friendliest, nosiest person I ever knew,” James King said. “He liked to know people just so he could interact with them.”

King’s personality served him well in the insurance business, where dealing with customers is of great importance.

“You have to like people to be in the business, and he did,” Jeff King said. “He treated the customers like family.”

King passed away at Good Samaritan Society Denton Village. He is survived by his wife Nancy, sister Genelia, sons James and Jeff, and several grandchildren.

Terrell will always be remembered for his anticipated annual Texoma fish fry and how excited my father, Joe W. Sherrill, was each year to go! Even after my mother, MaryLaJean Sherrill, and father were both placed in a nursing home, Terrell visited them almost every week!
We realize he might have been on a mission from the First Methodist Church, but he always made them feel like the rest of the world hadn’t forgotten them!
My family feels he ranks high with the angels! God’s speed...

Never miss an update about Terrell. Sign up today.