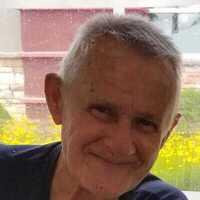 Thomas was born in Shenandoah, PA on June 5, 1936, the son of the late Veronica (Lehigh) and Thomas Flaherty.

Thomas was of the catholic faith and was a member of the former St. Canicus Church, Mahanoy City.

Tom had worked as an appliance repairman at Troyanoski Electric before retiring. After which enjoyed spending time with his family and tinkering around in his garage as well as daily visits to the Frackville McDonald’s for his morning coffee and going to the Black Diamond or M&M Redzone for the daily lottery numbers and his evening beverage.

He was the husband of the late Mary Ann (Krolick) Flaherty and is preceded in death by two sons SSGT Robert and John Flaherty and a grandson Daniel G. Sleva, Jr.

Friends and family may call for visitation on Sunday from 5 to 8 PM and Monday 9 to 11 AM at Louis D. Truskowsky Funeral Home & Crematory Inc.

I’m so sorry for the loss of your Father. I enjoyed Tom’s company when he came into the Black Diamond. He will be missed. You and your family are in our prayers. With sincere sympathy Terry Ambrose

To Tom’ s children, please accept my deepest condolences for the loss of your Father. I remember him and your mother fondly. I also remember many of you when you were younger.

My thoughts and prayers are with all of you and your families.
Sincerely,
Peg Troyanoski Hoy

I am so sorry to hear about your loss. I will always remember his laugh. No matter what life brought him he always found a reason to laugh! You couldn't help but smile. May you find peace and comfort in your memories.
Sincerely,
Lori, Jillian, Jared, and Jenna Hartranft

Please accept our condolences for the loss of your dad. I watched the video you put together. Looks like a lot of love in your family. Enjoy the time with your remaining siblings.
Ann and Tom Karpovich

Patty,Dan and the entire Family. Chris and I are sending our sincere condolences and love to all. He will be in my prayers

So sorry for your loss. Tom was such a sweet man. He always had a smile on his face. May you all treasure the memories you have with him.

So very sorry everyone that you lost a very special person in your life. Tom was a wonderful man, that smile! That's what I see everytime I think of him. To know him was to love him. I pray that you find comfort in knowing how many people do love him and all of you as well! Everyone in your family are all such wonderful people. Love you all God bless!

Sorry for your loss. My deepest condolences are with y’all. Sending prayers love strength and courage much love to all.

Patty, Susie, Veronica and family. There are no words that will take away your pain, your dad was such a great guy, I remember him coming in and sitting in suglias having a coffee and chatting with us. He was always smiling, that's how I'll remember him.
I know the heartache you all are feeling, and I'm sending prayers that god will comfort you all .
Richie and I are here if you need anything
Hugs and love to all❤❤