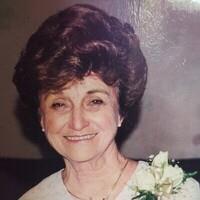 Born to Harold and Irene Mullock on November 9, 1930, Joan shuttled back and forth during the Depression years between Long Beach, where her mother lived, and Ojai, Arizona, where her father had gone to find work.

By the age of twelve, Joan lived in Hollywood with her father and step-mother and attended Immaculate Heart School for Girls. She attended Hollywood High for grades 9 through 11, and finished her high school career by graduating from Long Beach Poly High School.

During her high school years, Joan attended the Youth Group at the Brethren Church on 5th and Cherry in Long Beach, where she met most of her life-long friends and her “Husband to be”, Howard Lyon. They married at 18 and Joan began the life of a basketball coach’s wife.

Howard and Joan’s first move was to Avalon High School. Joan lived in Avalon for 5 years and the following summers for the next 12 years. Their first two children, Howard Dennis Lyon and Neal Kevin Lyon, were born in Avalon.

After Howard’s career took him to coach at Poly High School in Long Beach, where their third child, Corey Michael Lyon, was born.

Joan lived in the same house on Senasac for 63 years. She attended Los Altos Grace Brethren Church, where she was one of the original members. She helped found District Church Youth Programs, such as “Friday Night 5th Quarter” and the Sunday night District “Sings.” She was also instrumental, along with many of her life-long friends, in the operation of Taquitz Pines Summer Camp.

It was through these youth activities that many life-long friendships between her and a younger generation were formed.  For the past fifteen years she was a volunteer in the church office and was an active choir member from its formation.

Joan began her life as a grandmother in 1982, when Christina Michelle Lyon was born. Shaene Ashley Lyon followed soon after in 1985.

Joan became a great grandmother when her first great grandson, Brady Anze Lyon was born in 2011. A great granddaughter, Violet Shirin Zandi, followed soon after in 2015.

No bus to Brethren baseball games - car pool. And if you were smart, you get to Mrs. Lyon station wagon ASAP. Because there going to be a stop along the way for sodas and fries - and she knew who watered down their Cokes the least!

Always a welcome sign out at their home. Day or night - if you were in the area, you better drop by for a visit!

We all lost a special "Mom" a few days ago ... but Heaven gained a very special and beloved Servant of the Lord.

Never miss an update about Valeria. Sign up today.