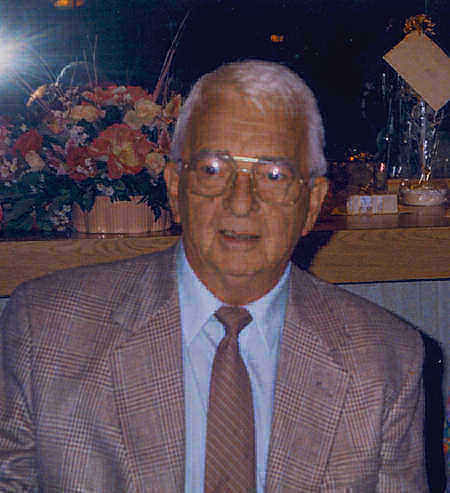 JANESVILLE--- Vernon J Davis, age 89, of 1702 S River Rd., was received by the Lord on Tuesday, June 2, 2009. He was born on March 10, 1920, in Escanaba, MI, the son of Joseph H. Davis and Rowena (Peters) Davis. Vernon graduated from Harvard Illinois High School in 1938. He enlisted in the Army Air Force in March of 1942, and upon completing aircraft mechanics school at Chanute Air Base in Illinois, he married his fiancée, Loraine E McCabe, on May 23, 1942. Loraine passed away on April 16, 2005. Eventually, Vernon was deployed on the Queen Mary to England, where he became chief mechanic on a P-51 fighter plane flown by Lt. Urban Drew, who became an "Ace" and is credited with shooting down the first German jet aircraft. Vernon's picture, with his pilot and their plane, appears in the Champlin Aircraft Museum in Phoenix, Arizona. In 1946, Vernon and family moved to Janesville, WI where he began his 30 plus year career with the Parker Pen Company, as a supervisor in production and quality control. After retirement, Vernon and Loraine enjoyed traveling with friends, gardening, reading and the arrival of their grandchildren and great grandchildren. Vernon was a member of St Mary's Catholic Church and a Lifetime Member of VFW Post 1621. He is survived by his 3 children: V. James (Suzanne) Davis of Trinidad, CO, Mary Jo Moll of Spokane Valley, WA, and John Daniel Davis of Prairie de Chien, WI; 4 grandchildren: Jeffery (Carissa) Davis of Whitewater, CO, Tricia (Derik) Olin of Sheridan, IL, Andrew (Linda) Moll of Elk River, MN and Michael (Christina) Moll of Spokane Valley, WA; and 10 great grandchildren: Fallyn, Hannah, Devin, Kristopher, Andrew, Nicholas, Jordyn, Michael, Jenna and Mariah. He was preceded in death by his wife, Loraine; parents; a brother, Walter Davis; and his beloved sister, Madelyn (John) Saxer, with whom he shared his love of art. A Mass of Christian burial will be celebrated at 11:00 a.m. on Saturday, June 13, 2009, at ST. MARY'S CATHOLIC CHURCH. Friends may call on Saturday from 10:00 to 11:00 a.m. at St Mary's Catholic Church. Interment will be in Mt Olivet Cemetery. SCHNEIDER APFEL SCHNEIDER & SCHNEIDER FUNERAL HOME is assisting the family. In lieu of other expressions of sympathy, memorials are preferred to HospiceCare, Inc, 3001 W. Memorial Dr., Janesville, WI, 53548, in memory of Vernon.

Never miss an update about Vernon. Sign up today.